Secrets from the past re-unite family

Hi, Joan, and welcome to Adventures in Authorland. Please get comfortable and tell us about your adventure.

Hi, Jean. Thank you for inviting me to your blog home. As I write this, your forecast is 18ºC—lovely and warm. My home in Toronto has a forecast of -11ºC with a wind chill factor of -18ºC. Brrr! Maybe I’ll come visit you.

I completed my first novel in the summer of 2004—smoking through 80,000 words in five weeks. I revised that manuscript heavily three times, writing a total of a 150,000 words to end up with the final version at 83,000 words. I shopped that manuscript around and was rejected everywhere. It ended up under my bed and I started my second novel. That’s when I consider that I became a writer because I didn’t quit.

The Serenity House series by Kathryn Shay. Serenity House is a home for troubled girls. The series is about how three of the girls, now grown, struggle with their backgrounds and find true love. Ms Shay always writes about real people in real situations; my favourite kind of novel.

I write contemporary small-town romance with interesting twists and turns in the plot before the HEA because that’s what I love to read.

Can you give us some details about your upcoming release?

Releasing on February 10th, just in time for Valentine’s Day, is SIGHT FOR SORE EYES, the second book in the Clarence Bay Chronicles. Emma Finn has inherited her grandmother’s china shop. She’s looking forward to a peaceful life with family and friends. Asher Stockdale, the new doctor in town, has a different vision for Emma, a vision of romance. But Emma’s resistant to change—she’s had quite enough of it, thank you very much. So a pair of scheming seniors decide to nudge Emma and Asher towards their happily-ever-after.

Who are some of your favourite authors?

Did you see Christopher Maloney on The X Factor talent show? Here’s a link. Christopher Maloney on The X Factor. Watch how this guy overcomes his fears during the audition. Watch all the videos if you can. Listen to what the judges have to say about his choice of songs. Throughout it all, Christopher remains steadfast to his vision. Not stubborn, steadfast. He listens, learns, and carries on. In the end, he wins through. New writers could do no better than to follow his example. J

[Joan, I just watched that clip. Wow! is all I can say. What courage. Just goes to show you should NEVER listen to naysayers. Jean]

Cathy Rossetti’s secret is Hayley, her outspoken ten-year-old daughter, who’s about to meet her family for the first time. Sadly, it’s taken a terminal illness to bring Cathy back to her hometown.

The elder generation of Rossetti women guards a thirty-year old secret with the power to rock Cathy’s world. Will her mother take their secret to her grave, or will her aunt break her punishing vow of silence?

Hayley hates secrets, so she’s sleuthing around Clarence Bay looking for her daddy. Is it her new BFF’s father, or mayoral candidate Ryan Chisholm, or Ryan’s handsome campaign manager?

Ryan has a secret, too. He’s still in love with Cathy, his high-school sweetheart. For a man running his election campaign on a platform of honesty, this could cause problems. Will dumping his popular fiancée cost him the election? And if Cathy still loves him after eleven years’ absence, she’s not telling. 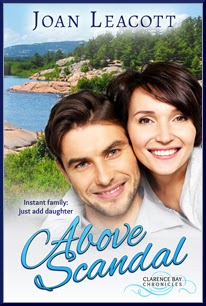 Stopped in the driveway of the big red brick house, Cathy unglued her fingers one at a time from the steering wheel and put the idling Lexus in reverse.

Maybe. If they let us in.

“Just nervous, Hayley sweetie. It’s been a while.” Eleven years since life had driven Cathy away. Now death drew her back.

Through the rear-view mirror, she glimpsed Ryan’s house across the street. Did he still live there?

Low pewter clouds bustled overhead. If only her memory could be cleansed as easily as the rain washed the dusty roads and sidewalks of Clarence Bay.

Sighing hard and deep, Cathy put her car in park and turned off the engine. She climbed out, smoothed her sleeveless pink blouse over her black jeans, and pushed her eyeglasses up her nose. A chilly raindrop splat on her shoulder and ran down her pristine front. She shivered and groaned at the mess.

Cathy’s tension eased just enough to permit a wry huff before snapping back like a hard rubber band. Holding hands, they walked up the front path to the deep porch.

“Well, here goes nothing.” Cathy pressed the doorbell with a trembling finger.

Cathy’s jumpy gaze skittered over the old house and its property—the neatly mown lawn, the freshly dug garden without a weed in sight, the sparkling windows. Somebody had a great way with tools.

The screen door rattled as the inside door opened. Zia Yola, grown softer and rounder in Cathy’s absence, stood gaping at them.

“Ciao, Zia Yola,” Cathy said in Italian and held her breath for her aunt’s reaction.
Zia Yola’s hands fluttered to her pale cheeks, her dark eyes huge above her stubby nails. Her gaze bounced between Cathy and Hayley as if she didn’t quite believe her own sight.

“Are you my grandmother?” Hayley asked.

Zia Yola’s fingers slid to cover her mouth and fisted there. She blinked rapidly and a few tears trickled down her cheeks. After several minutes of struggle, she released a shuddering breath. “No, I am nobody’s nonna. I am your prozia, your great-aunt Yolanda. Sì, Caterina?”

Cathy nodded, distracted by the current of sadness running under Zia Yola’s words. Nobody’s grandmother. How much had her tender-hearted aunt sacrificed to help raise her?

Zia Yola shook herself. “Santo cielo, what am I doing keeping you on the doorstep?
Come in, come in.” She stepped back and opened the door wide.

Joan Leacott lives in Toronto, Canada with her husband and son. She attends piano classes, melts in the hot yoga studio, and loves to cook for family and friends. She spends her summers on the shores of Georgian Bay.