Hello Linda, and welcome to Adventures in Authorland. Please get comfortable and tell us about your adventure.

I have to say I still feel like a fraud when I tell people I’m a writer as I’ve only gotten my first contract. One book in print sounds so unexceptional in these days when anybody can slap a cover on a garbled mess of a manuscript and throw it up on Amazon. I tell myself Harper Lee, the author of To Kill a Mockingbird, only wrote one book and she called herself a writer. Then the little voice inside my head says, “Honey, you ain’t no Harper Lee.” (Okay, I know, I know.) I’ve decided to feel like a writer when I get four books in prints. It’s a totally arbitrary number, but for some reason four books sounds worthy enough to me.

Almost all my works contain some element of fantasy. I like playing with the rules of reality and inventing my own.  Fantasy is tricky. You get to stretch boundaries, but at the same time the story must maintain a coherent internal logic or fall apart. I like the challenge. Most of my other works have been urban or paranormal fantasies, but a quirky idea came to me a few weeks ago, so now I’m working on a paranormal western. I’m not even sure that’s a genre. Maybe I invented a new thing.

I’ve always loved writing, but never had the confidence to submit anything to a publisher until recently. I had assumed writers needed a special mythic quality. They walked around bathed in light to their own theme music. I finally got up the nerve to attend a writer’s conference and found out everyone there looked pretty much like me. I was both horribly disappointed and incredibly relieved.  I realized the only thing holding me back was self-doubt. I started submitting my work and never looked back.

That’s a difficult question. I don’t want to go anywhere without indoor plumbing, antibiotics, chocolate, or with political and social oppression of women. That leaves out almost all recorded human history. On the other hand, the future is a great unknown. What if I picked a hundred years from now and ended up in a giant puddle of melted slag because an asteroid just crashed into the earth? I’ll stay home, thank you.

I’d like to be able to stop time. I never feel as if I have enough hours in the day to write. Stopping the clocks for a few hours would be great.  Sadly, I would also go to casinos, stop time, and then cheat at poker by looking at the other players’ hands. I know it’s wrong. I don’t even like to play poker, but I’d do it anyway just because I could.  It is best not to give me any superpower because I could easily fall down the slippery slope to super villain.

I know the muffin man.
I know the way to San Jose.
I know whodunit. 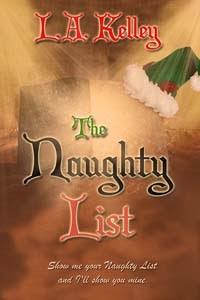 BLURB:
Not your mama’s yuletide tale unless she drank too much egg nog or was born with a cheeky sense of humor.

Murder, mystical artifacts, an invisible demon with anger management issues, and an overbearing cupid were not on Rosalie Thatcher’s Christmas list.  The holidays had always been a magical time, but not this year. Stephanie, the new manager at Penrose’s Department Store, is determined to make this season the most profitable in the store’s history, even if it sucks the life out of every employee. Introducing arbitrary rules and stealing the affections of Anthony, the cute temp Santa, were bad enough, but forcing Rosalie into the stupid elf hat was the worst. The worst, that is, until she meets a real E.L.F. (Elemental Life Form) named David and gets lassoed into a desperate hunt for the stolen Naughty and Nice List. Now they must dodge a murderous invisible demon and recover the missing artifact before hellhounds track them down.  The couple race against time for without the magical guidance of the Naughty and Nice List, the world will tumble toward eternal chaos.

EXCERPT  THE NAUGHTY LIST
Fingering the garish green material, David didn’t know whether to laugh or cry. The oversize ears stuck out like a genetic experiment gone horribly wrong. The lining felt like steel wool. Had the holiday spirit been reduced to this?
A wave of despair enveloped him. “I’m so sorry, Rosalie.” On impulse, David reached into his pocket. He pulled out a gold-wrapped chocolate bar saved for later, swiped from a stash hidden in the store manager’s office. David scribbled on a sticky pad and pressed the note to the wrapper. He slipped the candy under the counter just before a sudden murmur of voices broke the silence. The staff had arrived. He ducked behind a rack of clothing in the back as a girl walked up to the counter, an elf hat tucked under her arm.
“Ears, Rosalie.”
She halted in mid-stride. A sharply dressed twentysomething in a skin tight pencil skirt swooped down on her. To get a better view, David carefully eased back the clothes hanging in front of his face. He saw Rosalie’s fingers clenched around the hat. He chuckled to himself. She’s pissed, but hides her aggravation well. Sadhri would definitely approve of her self-control.
“Stephanie,” Rosalie stated calmly, “the hats are extremely uncomfortable. Everyone hates them.”
“Nonsense, they’re fine.”
“If you simply try one on you’ll see—”
“I don’t have to. I know they’re fine. The hats put people in the holiday spirit and cheerful people spend more money.” Stephanie examined her perfect French manicure. “So close to Christmas is an awful time to be out of work.” Rosalie jammed the hat on her head without another word. “Excellent,” cooed Stephanie. “Keep that attitude up and your name will stop appearing on the Motivation Memo.” Without another word, she flounced off.
David knew he should dash-away. Every moment in the open was risky, but he couldn’t take his eyes off Rosalie in the idiotic hat. What would she do?
The young woman leaned against the counter glaring after Stephanie. She bobbled her head back and forth and spouted in a falsetto sing-song:
“I’m a special elf from Penrose’s
I wear the special hat
You are not a special elf
You’re a dirty rat
You don’t belong at Penrose’s
You don’t know how to play
Wiggle your tight ass out of here
Damn you, go away.”
David snorted. Rosalie stiffened and turned around.
“Who’s there?” she called

BIO:
I’m the palest person living in Florida, and will take air conditioned comfort over heat and humidity any day. Married with three kids, I spent most of my work life in higher education, but now concentrate on writing fiction.  I never clean under my sofa. THE NAUGHTY LIST is my first book. Find me at http://lakelleythenaughtylist.blogspot.com

BUY LINKS:
The Naughty List can be found at:
Amazon
Barnes & Noble
The Wild Rose Press