Hi  Dawn and welcome to Adventures in Authorland. Please get comfortable and tell us about your adventure;
Thanks, Jean, for having me as a guest on your blog.

I have two novels published as part of the Highland Gardens series, Just Beyond the Garden Gate and Just Once in a Verra Blue Moon. A third book, Sea Panther, is currently in edits and will be the first novel in the new Crimson Storm series. It is difficult to decide which is the favourite. I’m most in love with whichever story I’m working on at any particular time. J Today, my favourite is JUST ONCE IN A VERRA BLUE MOON. Finn is sexy as all get out and Elspeth is sweet and loving. They are great together.

I’m really excited about the soon to release Sea Panther, coming this spring. The novel was a 2013 Golden Heart® finalist. I would share the cover, but it’s not ready to go public yet. Here’s the blurb:

After evading arrest for Jacobite activities, Scottish nobleman Robert MacLachlan turns privateer. A Caribbean Voodoo priestess curses him to an eternal existence as a vampire shifter torn between the dual natures of a Florida panther and an immortal blood-thirsting man. For centuries, he seeks to reverse the black magic whilst maintaining his honor. Cruising the twenty-first century Atlantic, he becomes shorthanded to sail his 90-foot yacht, Sea Panther. The last thing he wants is a female crewmember and the call of her blood.

Although she swore never to sail again after her father died in a sailing accident, Kimberly Scot answers the captain's crew wanted ad to escape a hit man. She's lost everything, her fiancé, her job, and most of her money, along with money belonging to ex-clients. A taste of Kimberly's blood convinces Robert she is the one woman who can claim the panther's heart. To break the curse, they travel back in time to where it all began—Jamaica 1715.

Work is also in progress on the next two stories in the Highland Gardens series. One or both will release fall 2014.

Do you belong to any non-writing organizations?

More than there is time for. I’m an avid gardener. Cooking is a passion. And many a weekend is spent camping with my husband, where we spend the days hiking, bicycling, or canoeing.

Do you hear from readers much? What kinds of things do they say?

I love hearing from readers. The big questions are when will the next book be out and whose story will it be? Several fans have requested Stephen’s story. We’ll just have to wait and see which of the two stories I’m working on comes out first.

What place inspires you the most?

The Blue Ridge Mountains. I first visited the North Carolina mountains to attend the Grandfather Mountain Highland Games and Gathering of the Scottish Clans while doing research for the Highland Gardens series. I would rather be in the mountains than anywhere else. We often camp in Shenandoah National Park in Virginia and spend the days hiking to waterfalls. A great way to refresh the muse.

The Highlands of Scotland, of course. I want to see what a real 16th century Highlander looks like. Are they as sexy-hot as we imagine?

Hard to choose between invisibility and the ability to fly. But I guess I’ll go with invisibility. Then I could watch people without them knowing. I’m sure that would produce fodder for some great stories. 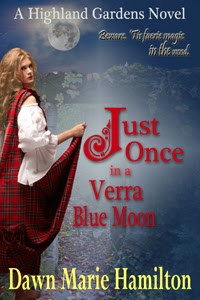 JUST ONCE IN A VERRA BLUE MOON, A Highland Gardens Novel

What happens when a twenty-first century business executive is expected to fulfill a prophecy given at the birth of a sixteenth-century seer? Of course, he must raise his sword in her defense.

Believing women only want him for his wealth, Finn MacIntyre doesn't trust any woman to love him. When, during Scottish Highland games, faerie magic sends him back in time to avenge the brutal abduction of his time-traveling cousin, he learns he's the subject of a fae prophecy.

Elspeth MacLachlan, the beloved clan seer, is betrothed to a man she dislikes and dreams of the man prophesized at her birth, only to find him in the most unexpected place—face down in the mud.

With the help of fae allies, they must overcome the treachery set to destroy them to claim a love that transcends time.

Journey from the lush gardens of the Blue Ridge Mountains of North Carolina to the Scottish Highlands of 1511 with JUST ONCE IN A VERRA BLUE MOON.

Finn gripped the rowan staff in one hand and leaned against the castle’s outer wall, trying to catch his breath. The short trip from the garden left him weak. If his stamina didn’t return soon, he’d go crazy. He needed to be healthy and strong so he could go after Maclay. Then he must travel home before he did something rash concerning Elspeth.

He stopped again at the castle gate and gulped air to remain standing.

Motion on the bay caught his attention. Men rowed toward the castle in several small boats of the type made from skins and wicker, the kind Highlanders called currachs. When the crafts beached, he recognized Donald MacLachlan as the man jumped from one, strode across the pebbly beach and headed toward him.

Suddenly a weight slammed against Finn, knocking the hard-won air from his lungs. His walking stick flew from his hand as he fell to the ground. Pain shot from his thigh, to his groin, to his chest. Gasping for breath, he found Elspeth’s soft body entangled with his.

Her lush curves wrapped around him, filling his senses with all that was missing from his dreams. The scents of sunshine and roses intoxicated him. His hard-on was instantaneous.

Shit! He attempted to detangle their limbs and set her away from his ill-timed erection, but her body melded with his. She felt so right in his arms. He was tempted to hold onto her and never let her go.

Elspeth caught her breath. Everywhere Finn touched her as they tried to break apart, her skin tingled. When their gazes met, everything else faded away. The world reduced to only the two of them, and his mouth dipped toward hers.

His lips grazed hers and fire blazed through Elspeth to her toes, the moment lasting an eternity. Finn’s tongue pushed between her lips, seeking entrance. Her mind reeled. With little thought, she wrapped her arms around his waist and twirled her tongue around his. Passion. Unlike the minimal pecks she’d received from Alexander, Finn’s fierce kiss conquered, possessed.

The sound of a throat clearing broke the spell, and Finn’s sinful mouth pulled away, leaving behind a fracture in the foundation of Elspeth’s expectations for the future.

How could she go on as before?

She gazed up through the haze of awakened sensation. Uncle Donald stared at her, a sly gleam in his eyes. He reached a hand down and helped her rise before assisting Finn. Unstable on his feet, Finn leaned on her while her uncle retrieved the walking stick.

She swayed—not from the burden of Finn’s weight, but the desire awakened by their kiss.

Dawn Marie Hamilton dares you to dream. She is a 2013 RWA® Golden Heart® Finalist who pens Scottish-inspired fantasy and paranormal romance. Some of her tales are rife with mischief-making faeries, brownies, and other fae creatures. More tormented souls—shape shifters, vampires, and maybe a zombie or two—stalk across the pages of other stories. She is a member of The Golden Network, Fantasy, Futuristic & Paranormal, Celtic Hearts, and From the Heart chapters of RWA. When not writing, she’s cooking, gardening, or paddling the local creeks with her husband.