Mary's books have magic about them

Hello, Mary and welcome to Adventures in Authorland. Please get comfortable and tell us about your adventure.
What inspired you to write your first book?

When I was in my early 30s, I had emergency back surgery. It was very scary and I remember thinking, I could die. And then immediately thinking, I can’t die. I can’t leave my children… and I haven’t written a book yet.

That’s when I realized how important it was to me. It still took me a while to get going. I wrote poetry, then started a complex historical novel based on my husband’s Irish family heritage. I didn’t get too far before I realized I was over my head. Not to mention the story was pretty depressing. Then I started working at the local public library and discovered genre fiction, in particular, historical romance. It seemed perfect for me. I loved history and especially relished the romantic, relationship part of historical novels.

I set the romance in my favourite time period, the era of King Arthur. As I was doing research, I came upon a Welsh king named Maelgwn the Great. He appeared to have been a very complex and charismatic individual, and I decided to base my story on him. Once I found my hero, the rest came easy, and I wrote Dragon of the Island in less than a year.

Since then I’ve written books in the medieval and Regency eras, as well as time travel and mainstream historical fiction.

Morgan Llywellyn’s Lion of Ireland and The Horse Goddess and Sharon Kay Penman’s Here Be Dragons all fed my passion for history, romance, the Celts, Ireland and Wales. Mary Stewart’s King Arthur series (The Hollow Hills, The Crystal Cave, etc.) entranced me with their Celtic lore and subtle magic.

Do you consider writing a career?

I’ve always had a “day job” working in a public library, so I’ve never relied on writing as my main source of income. Which is a good thing, since this is a tough business and only a few of my writer friends are completely self-supporting with their writing income. In that sense, I don’t think of writing as a career, but more of a passion and an intrinsic part of who I am.

When you’re young and your life is unfolding, it’s all very exciting and intense. As you get older, things get a little more boring and humdrum, even if you’re happy and have a good life. Writing for me is a way to experience that excitement and passion of being young and falling in love and finding your destiny, over and over again. I live vicariously through my characters and it adds an extra and very satisfying dimension to my life. I hope I’m able to share some of that experience with my readers.

I’ve written seventeen books altogether, a handful of which are still not quite ready for the light of day. Someday I will go back and rework them and figure out what they’re supposed to be. In fact, my current WIP I started almost 15 years ago. It took that long for the story to really develop and blossom.

In general, my favourite book is the one I’m working on. But if I had to pick one, it would be my first book (Dragon of the Island) because that’s when I discovered the magic. That moment when my characters came to life and became real before my eyes.

My most recent published book is Saint Sin, a sexy Regency historical romance. I have another Regency romance as well as a time-travel romance that are currently being reviewed by editors. Currently I am working on a fantasy romance. Although I’ve had paranormal elements in several of my romances (and I’ve written the first book in a fantasy series that’s still developing), this is the first time I’ve really developed a complete fantasy world. My heroine is a member of a magical race and my hero completely human, and the conflict between their different heritages is the main focus of the book (besides the love story, of course). I’m really having fun with this one. It’s called The Magic in the Mist.

Have you ever travelled to a place and come away with a story unexpectedly?

When I visited Ireland for the first time, we explored a bit of the north-eastern coast and the Glens of Antrim. I knew afterwards that the hero of my book The Dragon Bard, was going to end up there and fall in love with an Irish queen. Dessia came to me so strongly. It was like she appeared on one of the green hillsides in all her auburn-haired glory. 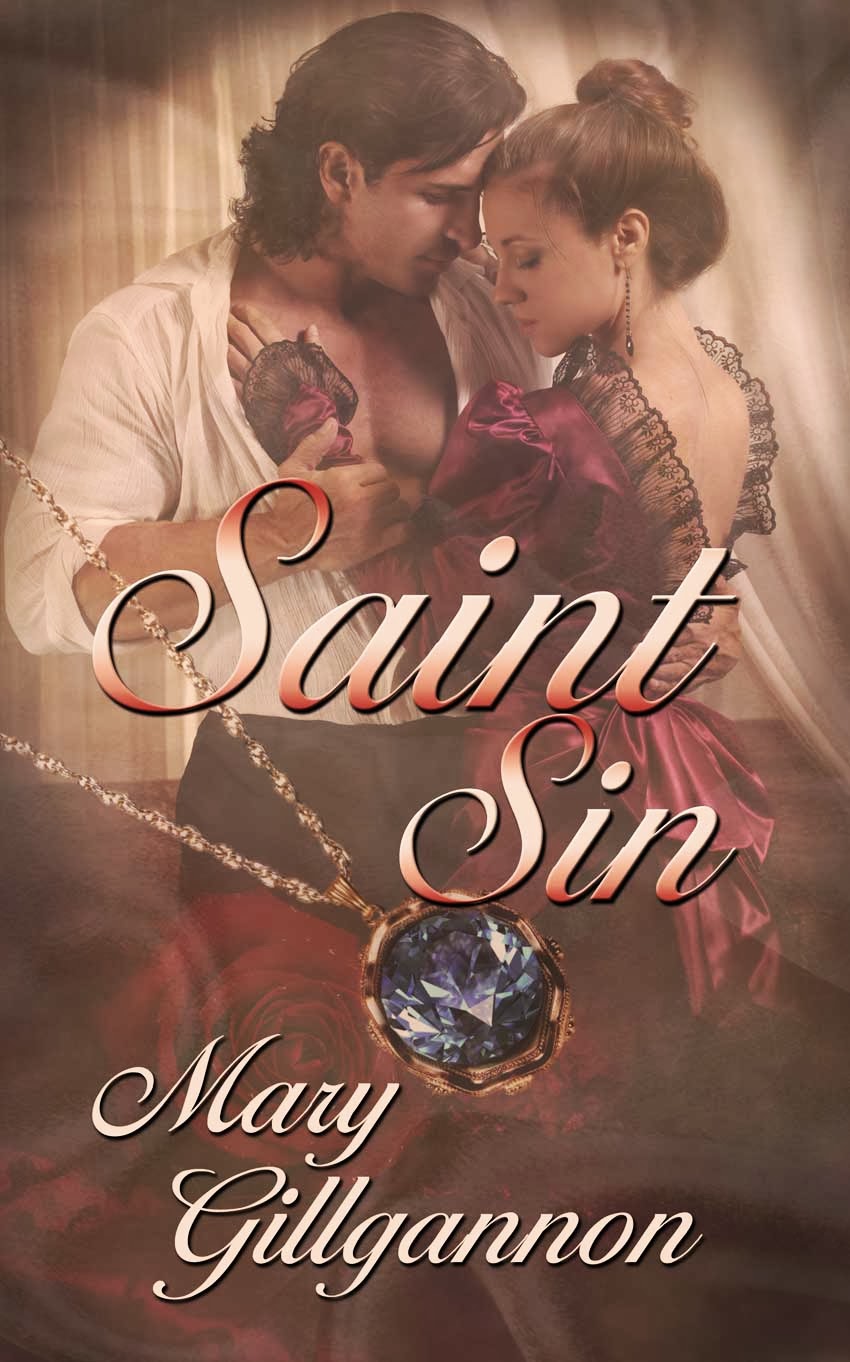 Ariella returned to the bedchamber and looked around. Where was the safebox? Where would a man keep his valuables? A landscape painting on the wall caught her eye. The colors were rich and vibrant and the scene almost magically alive. But what she noticed even more was that it was hanging slightly crooked. She went to the painting and lifted it with one hand, then felt underneath with the other. Her fingers encountered the edge of a door set into the wall. Excitement raced through her, then turned quickly to dismay as she heard the door behind her open. She released the painting and whirled around. A man entered and gazed at her in surprise. “Who are you?” he drawled. “And what are you doing in my bedchamber?”

Ariella froze. She expected him to approach her angrily. Instead, he leaned against the doorjamb and regarded her with a bemused expression. It took her only a moment to realize he was drunk. Quite so, in fact, gauging from his demeanor. His dark eyes were heavy-lidded and sleepy-looking, his tanned skin slightly flushed. He wore no coat and his ascot was half-untied.
His dishabille unnerved her. The way he held himself was both languid and alert. He reminded her of a panther, all fluid nonchalance, until it sprang and sank its teeth into its victim. The image seemed very apt. St. Cyr reminded her of a wild beast. Or a fallen angel. Beauty masking wickedness. Saint Sin, indeed.
Ariella's acquaintance with noblemen had previously been limited to two types: The boyish fops her brother associated with and the portly, older gentlemen who leered and asked her to dance. This man was a different sort altogether. Not young. Not old, either. He retained the grace of youth, and yet it was overlain with the weariness and cynicism of age. Despite his degree of intoxication, this man was no fool. She knew instantly he wasn’t someone to trifle with.
“So,” he said. “Are you going to tell me what you're doing here? Or should I guess?”
She licked her dry lips. No plausible explanation came to mind. None.
He moved suddenly, coming to stand a few feet away. Her heart stopped. “Mmmm,” he said. “I assume that means I’ll have to guess. Let me think. I come to my bedroom to discover a beautiful young woman waiting for me. What could it mean? That I've died and gone to heaven and she's my reward?” He shook his head. “Doubtful. Very doubtful. Or, perhaps she wandered in here by mistake, looking for the water closet?” Ariella opened her mouth to agree, but he went on, “Yet that would seem very unlikely since there are half a dozen water closets between here and the ballroom. No, I think you must be here for something else.”
He moved nearer, his gaze assessing. She surveyed him as well, observing the faint lines etching his elegant features. The long, lean power of his body. The way strands of his raven hair had escaped the black ribbon tying it. Another oddity. No men she knew wore their hair in a queue.
He still held a half-empty wine glass, cradling it in graceful fingers. “Mmmm,” he said again, with a kind of feigned amazement. “You're dressed like a Cyprian more than a lady, but then it's hard to tell about such things these days.” Smiling tightly, he added. “Many ladies of my acquaintance indulge in behavior more suitable for a street corner doxy.”
He slowly circled her, perusing her body. By the time he came to stand in front of her once more, Ariella's heart was thudding in her chest like a drum. The key to the safe, concealed in her left hand, seemed to burn her fingers.
“Yes,” he said. “You make a delightful fashionable impure. The perfect blend of refinement and sensuality.” His gaze surveyed her once more. “But, the question remains, what is a luscious demi-rep doing in my bedchamber?” He raised his eyes to her face.
Ariella remained frozen, like a rabbit trapped by a predator. Then, all at once, the words came tumbling out. “I was sent here ... by a gentleman friend of yours.” It was only a half-lie.
His puzzlement seemed to intensify. “Sent here? As a gift?” He stared at her. Then a slow smile spread across his face.

Bio and links are:
Mary Gillgannon writes romance novels set in the dark ages, medieval and English Regency time periods and fantasy and historical novels with Celtic influences. Her books have been published in Russia, China, the Netherlands and Germany. Raised in the Midwest, she now lives in Wyoming and works at public library.
She is married and has two grown children. When not working or writing she enjoys gardening, traveling and reading, of course!
Links
Website: http://marygillgannon.com
Blog: http://marygillgannon.blogspot.com
Facebook:  https://www.facebook.com/mary.gillgannon