Welcome back, Kris. It’s great to see you again.

First of all, thanks so much for inviting me back to your blog, Jean. It’s lovely to be here.

Do you see writing as a career?
Yes, absolutely. I can’t wait to give up my ‘day job’ to write full-time. I thought this would be happening at Christmas, but I’m still spending far too much time up a ladder! My husband and I have a two-person decor business and we specialise in installing curtains and blinds. It's a wonderful way to meet people though, and I do get to see some fantastic properties. Simply being in some of these places makes stories start to bubble in my brain.

How many books have you written? Which is your favourite?
I think it's fourteen now (well, plus a couple that were just practice and will never see the light of day.) My favourite is always my most recent and in this case it’s called MORE THAN THE MONEY. That's because I'm always closest to the people I'm currently writing about.
A strange thing has just happened though. Seven of us are putting out a boxed set of contemporary romances and I was sent the final formatting to check last night. The boxed set is called Second Chances, and the book I'm including is The Wrong Sister. As I skimmed through it I was amazed how much I enjoyed it, and that's a book I published at the very end of 2011. In some ways perhaps I'd say The Wrong Sister is also a contender for favourite book because it has strong links to both my sister and my mother because of a breast cancer connection. That makes it sound sad and dreary, but it's not. It’s a hot and sexy romance!

In which genre do you prefer to write and why?
Always contemporary. Historical research leaves me cold, and I’m too much of a realist to enjoy inventing fantastical creatures or complicated crimes.

Can you give us some details about your upcoming release/s?
My best-selling book is called Taken by the Sheikh. It has been consistently popular from the day I published it. Therefore I am writing another two Sheikh novels, and am three chapters into the next one. Desired by the Sheikh’ will be out later this year, with a third to follow as soon as I can manage it. This third one is planned to solve a mystery which I put into the first.

Do you belong to any non-writing organizations?
Yes, I’ve been a member of Soroptimist International for 28 years now. This is a worldwide service club for women, and we raise money for local, national, and international projects. Of any service club in the world we have raised the most money for the clearance of landmines, which is something I'm very proud about. I'm a past member and local past president of the New Zealand Camellia Society, and am still very keen on my garden. I always put a few garden shots on the last page of my website.

Do you have any advice for new writers beginning their adventure?
Don’t say you’re going to be a writer, just BE a writer. Don't say you're ‘going to write a book’, write the damn book. Writing is a job which takes a great deal of determination and persistence. It's hard. It’s either too lonely or you’re being interrupted all the time. There’s nothing for it but to DO IT.
Exercise your writing muscle every day. I find it’s a real help to keep a word-count total on a sheet of paper beside me. Not a computer file – a sheet of in-your-face paper that begs to have its total updated every now and again. And that’s how I know I’m 12,093 words into my next Sheikh.

Blurb: MORE THAN THE MONEY
Exiled from his family for half his life, hard-living cowboy Rory Morrissey finally quits Texas and embarks on a desperate and delicate mission: to return to New Zealand, convince shy Kiwi heiress Alfreida Hamlin to marry him, and earn a fresh start, respectability, and one hell of a farm.
Alfie might be shy but she’s no pushover. When she learns about the succession deal being hatched between her autocratic grandfather and the handsome Texan stud, she rebels. There’s no way she’ll stand by and have her expected inheritance and freedom stolen away, so with only one month to outwit the scheming duo, she throws caution to the wind and snuggles up to the man she’s been ordered to marry. After all, she needs to know her enemy if she expects to beat him at his own game.
Warning: Contains one hunky cowboy determined to ride down his heiress, hog-tie her, and bundle her into his bed.

EXCERPT - MORE THAN THE MONEY

So this is the girl?
Rory fought to keep his curiosity from showing as she slid, eyes downcast, into the gracious old sitting room. The dry-pine smell of the recent Christmas tree was overpowering, and he was trying not to sneeze.
The grandfather immediately abandoned his small talk, heaved himself to his feet, and began introductions. “Rory, may I present my granddaughter Alfreida. And this is Rory Morrissey, who you’ve heard me talk about from time to time, Alfie.”
She looked up then, and nodded politely enough to him. Offered a slim hand to be shaken. Somehow made it perfectly plain that a cousinly kiss on the cheek would not be acceptable. And bent to pet the big grey cat which had stalked into the room with her.
Rory burned at her cool rebuff. She hadn’t even spoken to him. 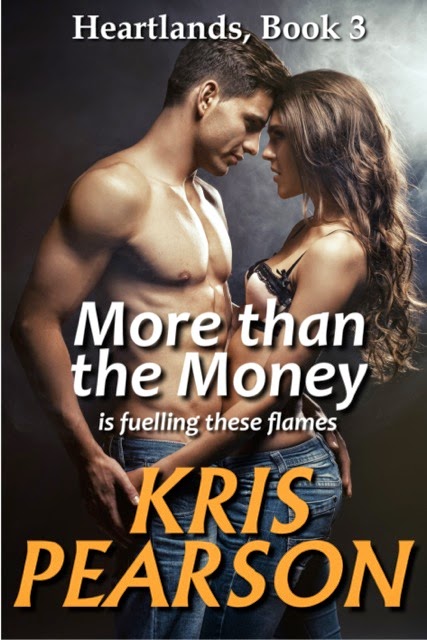 “You have a lot to do with the animals here, I guess?” he drawled, just to get a reaction.
“She’s called Dorothy,” the girl replied without looking at him again.
So—a soft husky voice that strummed over his nerve endings like a flick from a chiffon scarf. But her aloof attitude just begged to be tamed. “I meant the bigger animals.”
That brought her eyes up to his. Clear blue-green eyes, fringed with dark lashes, each tipped with gold. She straightened with noticeable reluctance.
“We run mixed beef-and-sheep mostly. Angus cattle—the black ones. We’re not a dairy farm.”
“No, I know that.”
She gave a ‘why-did-you-ask’ kind of shrug and looked down at the cat again.
Rory decided she was a bad mannered little bitch, undoubtedly spoiled from the day she’d been born.
He studied her, knowing old Alfred Hamlin was studying him in turn.
She was tall. Slender. Badly dressed in a shiny frock that seemed strangely formal and sandals with leaf mould clinging to them. He amused himself by imagining her long chocolate ponytail freed and falling down her back in a soft wavy mass. Definitely an improvement. The dress had narrow straps; her arms were bare and lithely muscled. He wanted to take her by the elbows and shake her so he had her full attention. This was too important to mess up.
Still ignoring him, she bent again to stroke the cat as it wound around her legs, and he was granted an unexpected view of gorgeous breasts—a total surprise after her standoffish greeting.
His groin prickled and he ruthlessly squashed the sensation. But it was good to know she turned him on. It could only help later.
Frosty. Gauche. Spoiled. Not ideal qualities for a wife, but by God he’d take her to get Glenleighton Estate.
“Champagne!” old Alfred barked, heading for the gleaming mahogany sideboard where there was an opened bottle gussied up with a white napkin around its neck. He took it from its resting place in a silver bucket of rattling ice cubes and began to pour with a less than steady hand into three waiting flutes.
Rory drew a deep breath, grateful to have a distraction from those enticing breasts, and nearly sneezed as the Christmas tree scent hit him again. “Thought you’d be a whisky man, Alfred?”
“Any other day, yes. But we always celebrate with champagne at Glenleighton.”
“Celebrate?” the girl asked, still stroking the cat.
“It’s not every day we have a visitor from the other side of the world. Drink up, drink up. You too Alfie—leave that disgusting beast alone. Make an effort to be sociable, for heaven’s sake.”
She ignored the insult with a slow closing of her deep-lagoon eyes. “Dorothy’s almost due to have kittens.”
This time she looked up at Rory. The smoky voice, unfettered breasts and candid eyes made him wonder if she was in on the plan. Did she know she was part of a hellish bargain? Was this her way of showing him she might be worth having?

Buy links:
Amazon - http://amzn.com/B00KSO4TKU
iBooks - https://itunes.apple.com/nz/book/more-than-the-money/id882313823?mt=11
Barnes & Noble - http://www.barnesandnoble.com/w/more-than-the-money-kris-pearson/1119611796?ean=2940045964517
Smashwords - https://www.smashwords.com/books/view/441501
About Kris:
If it's fine, Kris gardens. If it's wet, she writes. And if the writing's going well, the garden can look after itself...
Her latest books are her Heartlands series and June 9 saw the launch of the third, MORE THAN THE MONEY.
Kris writes sizzling contemporary romances, and is the current membership secretary for Romance Writers of New Zealand. Six of her books are set at least partly in the capital city of Wellington so she can make use of the beautiful harbour in the plots. She's called them her Wicked in Wellington series. (There's a boxed set of three Wickeds if you'd like to save some money.)
In a new adventure, two of these are now available translated into Spanish, with at least two more to follow. The first titles are 'La cama del constructor de barcos' and 'Zona prohibida'. There's a Spanish version of her website - just click the flags at the top right of it to change languages.
Kris hopes you enjoy reading the titles so far available, and assures you there are more to follow. Keep checking her Amazon author page, or her website - http://www.krispearson.com for up-coming stories.