Hello Amy and welcome to Adventures in Authorland. Please get comfortable and tell us about your adventure.

What inspired you to write your first book?
I have always loved to write. As well as romance, I read action/adventure novels and thrillers. One of my favourite authors is Tom Clancy, and in the late 90’s I read a book that had Tom’s name on the cover, but it was written by a ghost writer. Needless to say, it wasn’t the best Tom Clancy novel ever written (right). And I said to myself, I’ll bet I can write better than that. So, I actually sat down and wrote a thriller, and then another. The problem? They were AWFUL! I had no idea what I was doing. The good thing is that while I was writing those two horrible manuscripts, I was taking writing classes and going to seminars and conferences, and learned a lot about the craft.

But writing continued to be a hobby until ten years later I wrote a Native American Historical novel, Boy Man Chief, that won the League of Utah Writers award and the Spark Book Award and was subsequently picked up by a small press.

How many books have you written? Which is your favourite?
Right now I am working on my fourteenth manuscript—and most of my books are 90,000 words. Boy, it’s really difficult to pick a favourite. I usually say it’s the one I’m working on (LOL). I really like Captured by the Pirate Laird. It’s different, because it’s about a Highlander and a pirate, and I love the hero, Calum. He forms my ideal of a Highland hero. I also like Beauty and the Barbarian because Merrin is my favourite heroine. I have a series coming out next year that are Highlander novels, but more sophisticated than the Highland Force books. I’m a little worried about what everyone will think of those, but they’re my favourite too!

Can you give us some details about your upcoming release/s?
Yes! Thank you for asking. In August, the fourth and final (so far) book in the Highland Force Series, Return of the Highland Laird will be released. It’s a novella, so a great read for a plane ride. The story’s about Alexander’s fall from grace and his journey back to power as Laird MacLeod of Raasay…and his romance with murderess, Lady Jane Drake.

In October, Rescued by the Celtic Warrior and Celtic Maid will be released. These two books represent my first foray into historical romances from the British Isles, and are Pict/Roman action/adventure romances.

In 2015 the Highland Dynasty Series will come out. I presently am working on the third book in the series, for which I have seven books planned (at the moment). That should keep me busy for a while!

In which genre do you prefer to write and why?
Interestingly, I found my voice with Scottish historical romance. I’m of Scottish descent, and received my master’s degree from Heriot-Watt University in Edinburgh. I’ve travelled to Scotland several times and love it there! Of course I must say there’s nothing like a good Highlander romance!

When you are not writing, what are your hobbies, passions, etc?
I suffer from “so many fun things to do, so little time” syndrome. But I bike about 10 miles per day to stay in shape, or if it’s cold outside, I fall back on the old faithful Zumba dancing tape. I like to golf and hike. I have shown Chihuahuas, though my two are champions now and dog shows are no longer easy to drive to. I like to sing, play the oboe, and I play the piano badly—so I mostly do that when no one is home.

Have you ever travelled to a place and come away with a story unexpectedly?
Oh yes. Travelling is a wonderful way to spur one’s imagination. When I arrived in Utah, I visited the Parowan Gap Petroglyphs. I was there all by myself, and marvelled at the intricate patterns inscribed in the rock by the ancient Fremont Indians. I’d never heard of the Fremont, so I started researching them as well as the meaning behind petroglyphs all over Southwest Utah. As I was researching, a story began to hatch in my mind, and thus sprang Boy Man Chief. This also happened when I went to Belize and saw Mayan ruins, but it wasn’t until about five years later I started writing Virtue about a dancer who gets a job on a cruise ship and ends up on the sacrificial altar of a Mayan cult. In the 90’s I visited Hadrian’s Wall, and didn’t write my Roman/Pict stories until 2011.

I’d love to visit fifteenth century Scotland. It was such a brutal time period, I might prefer to have an invisibility cloak, but I really, really would love to travel back in time. The smells must be horrific, and I imagine the food was very bland. But I’d love to see the clothing first hand. I’d love to actually get to know the people who existed back then and really understand them. How amazing it would be to have first-hand experience of medieval Scotland and then write about it!

BLURN and EXCERPT: BEAUTY AND THE BARBARIAN 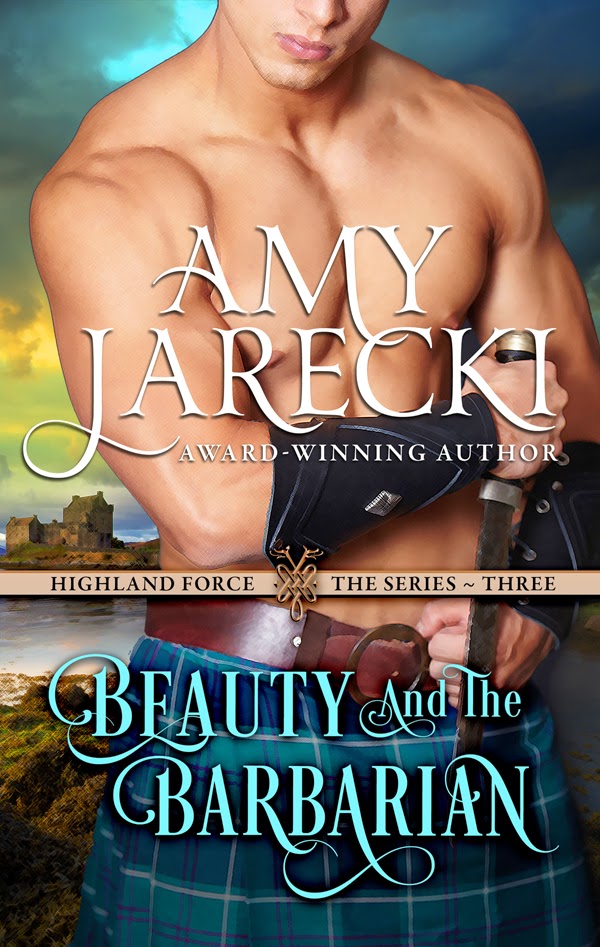 Born with the mark of the devil, Merrin has been hidden on the islet of Eilean Fladda for near twenty years. When the body of a Highlander washes ashore, the innocent lass presumes him dead. Brushing the hair from the rugged warrior’s face, her fingers connect with warm flesh. Warm.
Ian MacLeod wakes to a woman so radiant, he believes her an angel. But when the lass recoils from him, he fears she knows of his evil deeds. While he heals, Ian is stunned when he exposes her witch’s mark, yet he’s spellbound by Merrin’s allure. He’d do anything to erase his haunting past and earn her love.
But there’s a henchman after Ian’s head, and when that man learns the Highlander is still alive, the couple is forced to flee Merrin’s sheltered world. Fighting for survival, destiny demands they each face their demons, but doing so may forever ruin them both.

* * * *
Sprinting onto a thin strip of beach, Ian raced for the shore. Rain pelted his face as he skidded to a stop. Gasping for air, he sucked in deep breaths and peered through the dark night—north, then south. Thank God. A lone skiff sat askew, poorly camouflaged at the tree-line edge.
His side cramping from his frantic escape, he darted to the tiny boat with a pained hitch to his step. The deerhounds’ barks grew closer. If he hesitated, they’d be upon him in a blink of an eye.
Ian’s heart hammered his chest as he bore down on the skiff and shoved it into the angry swells. He jumped over the bow and snatched an oar. With every muscle, every sinew, he paddled against the surf and ignored his fatigue. A single oar made the boat fishtail, but there was no time to set them in their locks. Ian gritted his teeth and slammed the oar into the white swells in a hurried rhythm, side to side.
Over the roar of the surf and the driving rain, dogs yelped in an excited frenzy. Men shouted. Ian didn’t turn around—he needed more distance. As sure as he breathed, they were ramming lead balls down their muskets. With luck, the rain had soaked their slow matches, rendering the guns useless.
Ian sped his determined paddling and squinted through the pelting rain—across to his home, the Isle of Raasay. He hadn’t set foot there since he was four and ten, but the sight of the island enlivened him. He could barely make out the black outline of Dùn Caan, the flat-topped peak that forever identified the isle as Clan MacLeod land.
A sharp jab struck him from behind. Ian’s body propelled forward. His nose slammed into the wooden hull. An ear-shattering musket clap followed, piercing through the wind. Something stung, burned his back. Ian slid his hand over the screaming pain. Hot blood oozed through his fingers.
More claps blasted from the beach, thudding into the tiny skiff. Ian rolled to his side. Icy water spurted over him. Frantically, he worked to hug both wooden oars against his chest. A thousand knives attacked his skin as salt water swallowed his lifeline to Raasay. The last thing he saw was the looming outline of Dùn Caan.
Blackness engulfed him.

Amy adores Scotland. Though she now resides in southwest Utah, she received her MBA from Heriot-Watt University in Edinburgh. Winning multiple writing awards, she has focused on the genre of Scottish historical romance. Her favorite eras are the fifteenth and sixteenth centuries as well as the time of the Barbarian Conspiracy during the Roman occupation.