Hello Deryn and welcome to Adventures in Authorland. Please get comfortable and tell us about your adventure. Deryn writes as Virginnia de Parte

When did you first consider yourself a writer?
I’d submitted my first sci.fi novella to three previous publishers and each had made suggestions, which I’d followed. The last had said it didn’t fit their stable, but they felt someone would take it. When the email arrived from the fourth publisher I presumed it would be another ‘thank you but no thank you’ with helpful attachments to soften the blow - but at the very end of the attachment list was “con…” and as I scrolled along the words “Contract with Secret Cravings Publishing” appeared. At that moment I knew I’d made it. It was a blissful moment that made all my efforts worthwhile.

What book are you reading now?
I have an eclectic taste in books and belong to a book club. The latest novel we received is ‘A State of Wonder’ by Ann Patchett. I loved her other book, ‘Bel Canto’, and already I’m deep into this story. I’m trying to objectively understand how it is written, but the story overwhelms me and I give in and enjoy reading it instead.

Do you see writing as a career?
Yes, I do.  It’s an ideal career and one I can do at home, without the hassle of going to work and bending to an employer’s demands. I’m lucky enough to be retired. The art of writing suits me. It allows my imagination free rein and it keeps my brain extremely active. I am constantly learning new skills both electronically and manually.  I belong to several writing groups, have had to learn to objectively edit my own work and absorb and accept critiques from other authors. I’m lucky to be in contact with other writers as the actual act of writing can be rather solitary.

Have you ever travelled to a place and come away with the idea of a story?
Yes, this happened to me at an airport, on our way home from a holiday. I sat, quite weary, watching people hurry by and noticed the latest fashion in suitcases. They were upright with four wheels on the bottom. The owners hugged them against their sides, holding the handles firmly, as if they were children. My novellas are set in the future and it occurred to me that I could use these upright suitcases as ‘pets’ that would follow their owners. I soon worked out how. They would need to follow an electronic signal worn by the owners. From this I began a whole new novella, ensuring that somewhere in the story I had the airport scene with the suitcases.  I’ve had feedback from readers wanting me to contact suitcase makers about this idea.  All of them love the suitcases and want to know where they can get one. They just need to live long enough. Someone will make them one day, I’m sure.

Do you have advice for new writers beginning their adventure?
It’s the old maxim write, write, and write some more. Take courses on-line, get critique partners and read lots of books.  The more you read the more your brain absorbs the flow of words and your vocabulary increases. Don’t ask your family to read your efforts. Find an outsider, a beta reader, who will give you honest feedback. Most of all – believe in you, be prepared to be wrong and be prepared to listen. Then dash off and write some more. Don’t give up.
I can’t write for M & B. I tried years ago and my brain will not write to their formula. I didn’t write for ten years after two manuscripts were rejected; but it no longer matters that M & B don’t want my efforts. I now write for myself.

Have you ever cried in a movie? Which one and why?
Doctor Zhivago completed undid me. I wept at the sadness of the story, the suffering of the child, the horror of her hand being let go in that crowd. (I was a young mother at the time)The scenery was magnificent and the love story tragic.  I couldn’t listen to the music for years afterward and never ever went to see the film again. Even today Lara’s Theme haunts me if I hear it. I don’t go to see a film if I know in advance that it’s a ‘weepy’. Why torture myself? I’m still getting over Dr. Zhivago!

Blurb: ROMANCING THE MEMORY COLLECTOR
When genetically altered Thomas meets Kate, who collects memory bubbles, an unlikely romance begins. A love match may not eventuate because theirs is a roller-coaster romance.
KATE BENTLEY, is short-sighted but too vain to wear glasses. When she is tossed backward by the up-escalator at Sydney Airport she is rescued by THOMAS WINTERS. She falls for his kindness and melted-chocolate voice and doesn’t notice his lined face or the double-chins caused by his blood-hound genes - until she puts her glasses on. 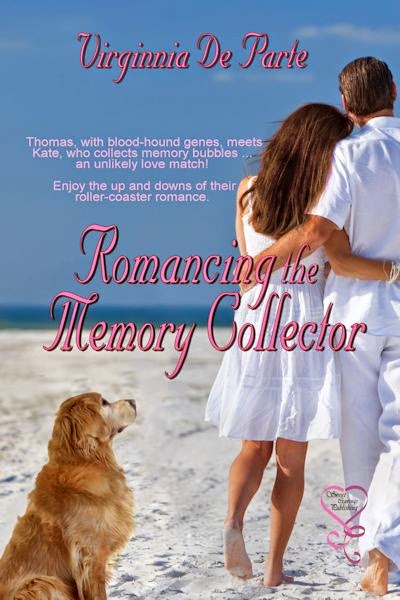 EXCERPT:
The moment she put her foot down, she regretted it. The moving plate of the escalator pushed her backward, and she tumbled over her suitcase, arms flailing, her shoulder bag swinging around and hitting her in the face.
God, she hated being short sighted.


Vanity, utter vanity, stopped her from wearing her glasses in public. At least with them on she would have noticed people coming toward her. Fellow travellers now staggered around her as she waited for the ringing in her ears to stop and the sting in her cheek to ease. Some uttered apologies as they stepped over or around her. A suitcase caught her ankle, clipping it with a nasty crack before the owner apologised and lifted it clear.
I will not cry. I will not cry.
She sniffed back tears, before crawling out of the way. She fumbled in her handbag for her damn spectacles that looked like the bottom of two wine bottles when she put them on. They enlarged her eyes until they looked like those of a frog. She’d grown up to the taunts of “googly-eye.” Today’s experience might cure her vanity because her present position verged on the ridiculous, baggage and legs strewn about, creating a traffic hazard.
“Sit,” a voice commanded. Surely the man couldn’t mean her?
She wanted to shout, ‘What do you think I’m doing?’ but at that moment a firm hand rested on her shoulder and a voice, as warm as a chocolate liqueur sliding down her throat, asked, “Are you all right, miss? Here, let me help you up.” She gave up looking for her glasses.
With one hand in her bag, and the other reaching out for the handle of her case, she couldn’t refuse the offer. The man cupped her elbow, put an arm around her waist, and lifted her slowly to her feet. He held her until she steadied. Gratitude flooded her, tears welled and she sniffed again, unable to spare a hand to find her handkerchief. A large soft white cloth appeared under her nose and she grabbed it, grateful to be able to wipe her nose and cheeks. It smelled of pine trees after the rain. Without thinking she put it in her sleeve.
“Thank you so much,” she said. “I’m sorry I’ve caused a traffic jam, it’s just I don’t see very well.” What an understatement. She peered at his shape in front of her. Then, realising she was frowning, she straightened her back and smiled. “I really should wear my glasses.” She gestured to where she thought her suitcase might be. “If you could pass me my case I’ll be on my way. Obviously the next escalator is the down one. Silly me.”
Chocolate Voice moved to the side and disappeared, coming back a moment later. She could hear the wonky wheel of her suitcase. “Oh you’ve found it. Great.” She reached to take the handle. It didn’t arrive.
About Deryn
I write futuristic romances under the pen name of Virginnia De Parte with a series of five e-books published by Secret Cravings Publishing. By writing about the future I have the pleasure of watching science catch up to my imagination.
I have an erotic novella e-book published by Totally Bound, called Memoirs of Lady Montrose.
My first Young Adult was published under my legal name last December, called A Taste of Gold,  it was released by Evernight Teens as an e-ook and POD.
My other love is writing poetry and I am published in this genre, both on line and in hard copy. A love of words, and changing the way they are arranged, drives my writing. I endeavour to insert poetic prose into my fiction.
I belong to writing groups and have several critique partners, all of whom help to keep me on-track and well edited.