Hello, Marlow. Welcome to Adventures in Authorland.  Please make yourself comfortable and tell us a about your adventure.

When did you first consider yourself a writer?
Even though The Wild Rose Press have accepted two of my novellas for publication, I don’t consider myself a writer, and probably never will. I really just want to tell stories and that’s what I aspire to be – a storyteller. The best part about putting my narratives on paper is when I write the first draft. I turn off the spelling and grammar function and just let the words flow. I don’t censor anything, any mistakes can be cleaned up when I edit. I just want to release the story in my head.
Plus, I’m probably the worst writer in the world when it comes to grammar and spelling. Just ask my family. I’ve been known, on more than one occasion, to ask my ten-year old how to spell something simple like – rabbit or maybe its rabit – okay, I’m not really that bad, but it’s close.

You’ve recently signed with a publisher. Tell us about your writing journey before and after this point.
Although, I’ve always imagined characters and tales, I didn’t start writing them down until quite late in life. I suppose I was always busy, you know how it is, travel, jobs, family and children. The first thing I wrote was a full-length novel. It was terrible, so bad that normal editing couldn’t fix it. Then I read somewhere (I wish I could remember where.) the art of writing is in rewriting. So that was it, I had to learn how to rewrite. But the problem was that it took me a year to write the terrible novel, was I going to spend another year writing a novel and then learn how to rewrite it. I decided I would start with three novella-length pieces. The first one took a long time because of the learning curve but by the time I had reached the third one I’d cut my time down considerably.

My first novella, A WOMAN OF HONOUR is due to be released this summer. My second, A Woman of Love, has just been contracted by the Wild Rose Press and I’ve yet to submit the final story A Woman of Courage.
I’m also working on a full-length novel to follow A WOMAN OF HONOUR, but that’s still in the first draft stage.

Can you give us some details about your upcoming release/s
My historical romance novella A WOMAN OF HONOUR, is due for worldwide release 27th August 2014. It is set in medieval Scotland at the time of the Scottish Wars of Independence. I wanted to write
a story about a woman who seems to be a nobody, but is, in fact, vitally important. And that’s my heroine, Isabel. She’s like a lot of us, in as much as, she sees herself as worthless. She’s very tall and thin, and while I don’t say it in the story, I picture her to be at least 6ft tall. She has no home, no dowry, and no prospects. But she does have integrity and honour, and is determined to do the right thing.

As a child, what did you want to do when you grew up? Writing, or something else?
When I was six years old I told my father that I wanted to be a carpenter and make beautiful furniture. I was devastated when he told me that girls couldn’t do things like that. I think that’s why I like to write about strong women who defy the mold, because until recently women’s lives were so restricted, not just in their chosen careers, but socially too.

Do you have any advice for new writers beginning their adventure?
You only need to do three things - learn, learn, and learn. I could study for ten years and still not know all there is to know about writing and the world of publishing. I will say this, try and learn from those who are already successful. Read books that are well written so that you know the standard you wish to achieve. And don’t listen to anyone who says romance is not real writing. Write what’s in your heart, and follow your own path.
Have you ever travelled to a place and come away with a story unexpectedly?
I don’t think there’s ever a time when my mind isn’t imagining different people, and unusual scenarios, but living in Western Canada we travel a lot. Taking off on road trips in the summer is part of our culture. And I suppose every place has a story to tell.
On one such trip we went to a place called Fort Steele. It’s nestled in the Kootenay region of British Columbia, Canada. A hundred and fifty years ago it had a population of 3000 people but when the railway bypassed the town it died and by 1950’s it was a ghost town. Fort Steele has been resurrected as a museum, with its buildings restored. Actors roam the town enacting skits for passing tourists. It’s a wonderful place and one can’t help but imagine different storylines as you walk through the Victorian buildings and touch the objects that were used by people so long ago. 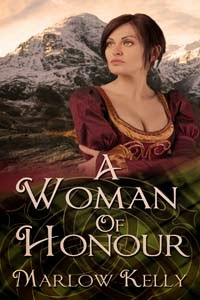 Blurb: A WOMAN OF HONOUR
Duncan Campbell wakes to discover he is imprisoned with a woman in his enemy's dungeon in the Highlands of Scotland. The disenchanted warrior hopes his last few moments on earth will be spent in the arms of the sweet-voiced Isabel. If only she will cooperate.
Isabel Douglas has no intention of obliging the crude captive. The penniless noblewoman considers herself too tall and thin to be desirable. She intends to become a nun. But first, disguised as a boy, she must deliver an important letter to Scotland's hero in hiding, King Robert the Bruce.
Together, the pair make a daring escape that plunges them into the bleak countryside in the middle of winter. In the struggle to survive, they learn the true strength of their feelings for each other. But when Duncan's animosity towards the king becomes evident, Isabel must decide between her heart and her country.

EXCERPT:
Duncan Campbell drifted into consciousness and opened his eyes to absolute blackness. He lay perfectly still on the cold, dirt floor listening. A small rustle of fabric echoed in the darkness. He cocked his head, getting a sense of the sound’s location, then rose to his feet. “Tell me who you are before I tear you apart,” he roared, seizing his opponent.
Whoever it was didn’t answer, just silence. A fist punched him on the nose. Pain ricocheted through him, and he grabbed his face. In the dark, he lost his balance and fell in the dirt, cradling his head in his hands.
“Oh my, are you all right?” asked a small voice.
“No, I’m not.”
“You threatened me, and I wanted to give you fair warning I will fight back if you touch me.”
The lyrical voice stunned him. A woman? She spoke Gaelic with a strong, lowland accent. He shook off the pain and asked,  “Where am I?”
“Dunstaffnage Castle. Don’t you remember your capture? I’ve heard of people getting a bump on the head and not remembering their own name. Is that what happened to you? Did you bump your head?”
Lord, she was talkative.
“Is it?”
“I remember I was hit from behind scouting the bast….Are we in the dungeon?” He rose to his feet.
“Yes.”
He grunted. On the bright side he hadn’t gone blind. On the other hand they were in a dank, windowless cell with no hope of escape. There wasn’t even a sliver of light coming through the door.


After being thrown out of England for refusing to drink tea, Marlow Kelly made her way to Canada where she found love, a home and a pug named Max. She also discovered her love of storytelling. Encouraged by her husband, children and let’s not forget Max, she started putting her ideas to paper. Her need to write about strong women in crisis drives her stories and her curiosity regarding the lives and loves of historical figures are the inspiration for her characters. Marlow has published several short stories some of which can be found on her website at www.marlowkelly.com
Posted by Jean Drew at 2:28 PM