Of an angel on Love Detail and a tattooed heroine

Hi, Shauna and welcome to Adventures in Authorland. Please get comfortable and tell us about ypur adventure.

How many books have you written? Which is your favourite?
I have written eight books total.  (Now, those are just the publishable ones, I have a few “practice” manuscripts hidden under my bed, LOL!)  This includes one novella, one short story, and six novels.  Two of those are under my YA persona, SC Montgomery.

Asking me to choose my favourite is kind of like asking me to pick a favourite child!  I love them all for different reasons!  My Young Adult novels allow me to express the more emotional aspect to my voice, and my adult books let me be a bit more sexy and sassy, while still emotional.  But, if you’re gonna twist my arm, I suppose I’d choose Cupid’s Last Stand, which is the book I just completed and will release on June 24th.  It is the fourth and final Cupid Chronicles novel and I have grown such a soft spot for my hero, Tristan, because I fell in love with him when he was just a wounded teenager back in The Halo Effect.

Can you give us some details about your upcoming release/s?
Sure!  I’m here to share my last release, CHARLIE’S ANGEL, which I love.  (One of my writing friends talked me into a Cupid Chronicles Novella with one of the secondary characters from my first novel, Inked by an Angel…great idea!)  But, as I said before, my upcoming release is Cupid’s Last Stand, and it is my grand finale on the angel stories, at least for now, as I get ready to start a new series.  Like I said, it’s the story of the wounded boy, grown into a man, who finds out if your first love can be your last.

Who are some of your favourite authors?
Ooh, I love this question!  I have so many that I love!  But, my absolute favourites are: Kristan Higgins and Jill Shalvis for their ability to make me laugh, Selena Laurence for her awesome, sexy stories, Katy Evans because the Real series is one of my absolute favourites, and the wonderfully talented Lori Wilde.

Do you hear from readers much? What kinds of things do they say?
I do hear from readers once in a while, and I try to be as interactive with them as I can.  It was so much fun (and a little strange, too) when I got my first fan mail.  People actually like my books as much as I do?  LOL!  But, overall, my fans and readers are the best!  They have really taken to my unique blend of contemporary romance and angels, especially my main cupid Michael.  Not to mention my tattooed hotties!

What place inspires you the most?
I love just about any beach because the sound of the waves rushing is very soothing to me, but my all-time favourite place is the Texas Hill Country.  It’s so beautiful and peaceful for me, and I’ve based or visited there in several books.

Share three fun facts about you that most people don’t know.
1. I have a huge crush on Gerard Butler.  OK, maybe that’s not such a secret.  But, I also love the model Parker Hurley…it’s those tattoos!
2. I have four tattoos of my own, the first one being a birthday gift from my dad.  (We went together and he got his first, too!)
3. I am a nerd.  I graduated near the top ten percent of my high school class and I was Valedictorian of both my LVN and RN nursing programs, graduating Summa Cum Laude.
BIO:
Shauna grew up an only child with two open and loving parents in Central Texas.  She’s married to her high school sweetheart and is the mother to three awesome teenagers, including one she’s about to send off to the Air Force.  She is the award-winning author of the Cupid Chronicles series, including the newly released Charlie’s Angel.  Shauna also writes emotional Contemporary YA novels as SC Montgomery, works as a freelance editor, and is personal assistant to two NYT Bestselling authors.  She loves all things sexy, sassy, and Gerard Butler. 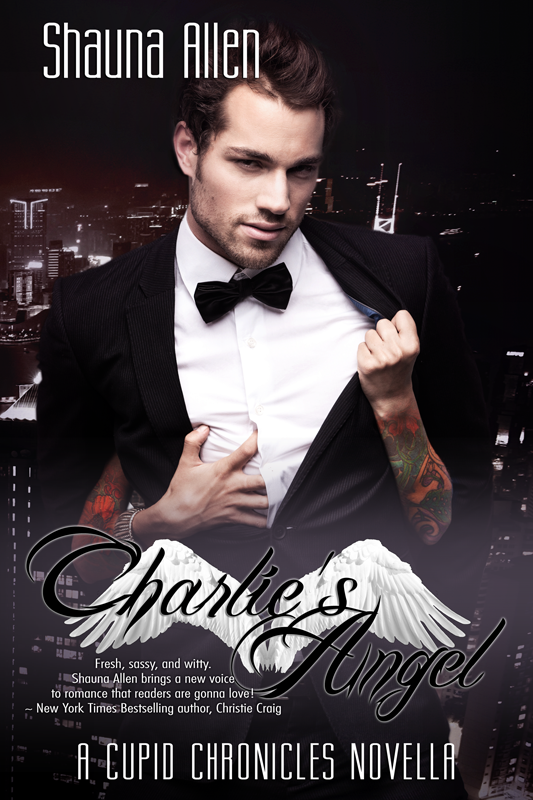 Miserable and unsettled in his predictable, suit-and-tie existence, Charles Benson is finally waking up and realizing a few things. He hates what his life has become.
But instead of a change, he finds himself thrust deeper into more of the same . . . only worse.

Tattooed. Pierced. Outspoken. Fiercely sexy.
Jaded after being burned by an unreliable dreamer, Kami Monroe secretly craves the stability Charles represents, even as she rolls her eyes at his uptight monkey suits.  It wouldn’t be a problem except for the unexplainable and explosive chemistry sizzling between them and their heartbreaking baggage.

Add an angel to the mix getting one last shot at Love Detail, and you could have a match made in Heaven . . . if they’d just get the hell out of the way.

“Do you ever relax?”
Charles glanced up. “Excuse me?”
Kami’s deep green eyes were scrunched in a frown. “Seriously. Your stress is vibing across the room. Are you always this uptight?”
His shoulders tensed. “I’m not uptight.”
Her gaze darted to his tie—a gift from Priscilla, which he hated—then back to his face. “Really? Could’ve fooled me.” She shifted and leaned back, exposing just a millimeter of her belly skin. “I’ll bet you even sleep in your dress shirts and ties. Or is it silk PJs for you?” She grinned.
He dropped the stack of receipts in his hand and sat forward. “Is that really what you think of me?”
Her eyes flared momentarily and his blood heated for the first time in weeks. Months. “Maybe.”
He couldn’t blame her. He presented a carefully crafted image to everyone. He had his whole life. It was what he’d been trained for since he was out of diapers. But Gran knew that artificial life was suffocating and unfulfilling. She’d always known. That’s why she’d gotten away from Texas and made a life in North Carolina with her simple home and her roses. Why hadn’t he seen it in time to let her know she was right?
Well, better late than never.
He tilted his head and studied the tattooed woman across from him now. Why did she goad him? Why did he let her?
Uptight. Hmph.
Slowly, he gripped the chair’s armrests and rose. He rolled back his shirt sleeves with casual nonchalance, first one, then the other, ever so slowly, as he rounded his desk.
She stayed silent, not moving, as she stared at him.
Finally, he faced her and leaned down until they were nearly nose to nose. Her eyes widened with some unknown emotion, her breath brushing across his flesh as her scent intoxicated him.
“Let me put you out of your misery, sweetheart . . .”
He blinked, glanced down at her plump pink lips then back into her stunned eyes. “I sleep as naked as the day I was born.”

Shauna would love for you to visit her at her website and blog at: www.shaunaallen.com
Facebook : http://www.facebook.com/shauna.allen.12
Twitter : http://tiny.cc/s0dlmw
Goodreads : http://www.goodreads.com/author/show/6916632.Shauna_Allen
Pinterest : http://pinterest.com/shaunaallen7/
You can also sign up for all the latest Shauna Allen news with her Angel Kisses Newsletter here! http://eepurl.com/D_RcP


And learn more about her YA persona at: www.scmontgomery.com
Posted by Jean Drew at 3:16 PM