Hello Margaret and welcome to Adventures in Authorland. Please get comfortable and tell us about your adventure.

When did you first consider yourself a writer?
I kind of slid into it. I've written poetry for years, and one day I wrote one I wanted to keep. At the time, I was scribbling my poems in notebooks which would be consigned to either a heap on my bookshelf or a pile in the attic, so I wanted a better way to track this one. I found an online site and posted the poem. Then I found another site and became more active.

Anyway, I got hooked, started storing my poems online, first in Yahoo Briefcase and later in Google Docs.  Because they were available, I was able to submit one for a contest. I was a finalist. Things snowballed from there.

What inspired you to write your first book?
The first book I wrote, which is due out later this year, is about a little boy who loses his mother in a fire. It was inspired by an incident in which a friend lost his wife and all four of his children in a tragic fire. I was haunted by this, and, unable to change the outcome in real life, wrote a story in which only the mother dies, but the boy and his father survive. I wrote 5000 words in a weekend, then spent the next year or two learning to really write and rewrite the thing into shape. It ended up about 11,000 words. Along the way, I took the Institute of Children's Literature course.

In which genre do you prefer to write and why?
I've fallen into writing science fiction. I have three sci fi novels published and am working on a fourth in the series. But I didn't plan to write science fiction.

I'm a way-back sci fi fan and have read reams of the stuff for years and years, but prior to 2010 I'd never written any. Around mid-September, I was taken with the idea of doing NaNo (National Novel Writing Month) with the idea of writing a sci fi novel.

Since the world building was the part I found intimidating, I started with that, and scribbled some notes and about a page about the plot. I planned to write (a

nd did write) a sci fi novel with a fourteen-year-old main character where he finds himself on an alien planet on which he feels strangely at home. He gets involved with terrorists and along the way discovers a number of secrets about himself.

I spent November writing, and from January through June or so revising. It was accepted for publication.

I never planned to write a series, mind. But a question about back story I'd asked myself about the original novel (it ended up as a single line in the text) ended up as another novel, and a few loose ends with respect to the bad guys ended up as another. The one I'm working on now uses a minor character from one of the books. Yup, another case where my character refused to leave me alone.

Who are some of your favourite authors?
I'm a huge theater fan -- I'm a native New Yorker, and my father was good friends with Sammy Silverman, the attorney who won Joe Papp the right to put on free Shakespeare in Central Park, so as a teen we went to all the plays every summer, and I fell in love with Shakespeare. I also love the plays of George Bernard Shaw. I took a theater course in college which required we crew on one of the plays, and I ended up as prompter on Major Barbara. I signed up on Friday, went to spend the weekend with a friend, and returned Sunday to find one of the grad students calling me.
Grad student (frantic): "Where have you been?"
Me: "Out. Why?"
Grad student: "Because Dr. Coakley wants everyone off book tomorrow and you need to be at rehearsals."
So I spent the next three weeks at nightly rehearsals. I learned the play *really well.* My classmates, who ended up at merely the five performances, had no idea -- until I told them -- what had been involved.

I also love Lewis Carroll.  As an inducement to study, I'd forgo trips to the local library during college exam time. I'd suffer from book withdrawal and reread Alice in Wonderland and Through the looking Glass - I had a copy of The Annotated Alice.
I also managed to teach myself to write backward and wiggle my ears.

As a child, what did you want to do when you grew up? Writing, or something else
I had no notion of becoming a writer until I was one, which points to a failure of imagination on my part. What I dreamed of was joining the circus. In fact, my friends and I put on a little circus to raise money for Polio for a couple of summers. We ended up with a few dollars to donate and a nice article in the local paper. It was loads of fun.

Do you have any advice for new writers beginning their adventure?
Believe in yourself. Join writing groups. Learn your craft. Know your strengths and play to them. Learn your weaknesses and work on them. Find your own voice, and trust the inner voice with will tell you -- if you learn to listen to it -- when someone's critique is right on and when it isn't.

Blurb
When Major Brad Reynolds is assigned to head the Terran Federation base on planet Aleyne, the last thing he expects to find is love, and certainly not with one of the alien Aleyni. How can he keep his lover, in the face of political maneuvering and of Ardaval's feelings for his former partners -- and theirs for him? 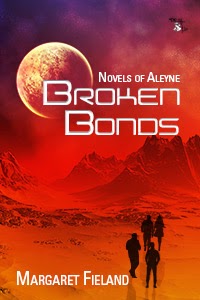 Brad took a deep breath of cool night air, inhaling the nutmeg scent of the flowers planted around Ardaval's front door. Before Brad could knock, the door opened and Ardaval stood in the doorway. Brad hesitated before putting out his hands palm up.
Ardaval placed his hands over Brad's. "My heart, my home, my hearth.”
"My hearth, my home, my heart," Brad murmured in response.
Smiling, Ardaval directed his gaze at Brad's eyes; it evoked the same curious flutter in the pit of his stomach as the last time they'd met. Ardaval held open the door and gestured for Brad to enter. "You've come to discuss Gavin."
"I have." Brad followed Ardaval into the front hall where tiles of local stone sparkled on the floor and a padded bench stood under a window. Through a doorway on one side, a glance revealed a kitchen furnished with dark wood cabinets, clean and a bit bare.
"Come." Ardaval gestured toward the back of the hallway where a doorway led into a center courtyard, open to the cool night air, and motioned to a small table. A red-leafed tree in the center spread its leaves overhead. Brad sat, and Ardaval sat beside him.
Brad needed to talk about Gavin Frey's political views. Views that, as far as he could tell from the records, were the opposite of his own. A breath brought him the scent of Ardaval's skin, musky, with a hint of clove. Was it duty or cowardice keeping him from reaching for Ardaval's hand and kissing the palm?
Ardaval clasped Brad's hand in his. "Tell me more about why you were posted to Aleyne."
Should he remove his hand? No. He enjoyed Ardaval's touch and what was the harm, really? When he glanced up, he found Ardaval regarding him with evident amusement.
"I recommended that a man who used psi to save his squad be given a dishonorable discharge." Brad hesitated. "Although the soldier deserved a medal rather than a court martial, he was a fool to admit he caught a thought.”
Ardaval nodded.
"About Gavin Frey. Is he your shan?" The thoughts slipped out.
Ardaval stared into Brad's eyes for a second or two before he replied. "As you surmise, he is my son; my shan, because I didn't raise him."
Might as well ask this, too. "His mother never told you about him?"
Ardaval shook his head. "No, she didn't. He spent six months here after she died. Then we disagreed over a matter of ethical principal and he left."
Given what he understood about Frey, Brad would have been surprised if they hadn't.
"He married, but his wife died. He has a son who is now fourteen by Terran Standard years."
"His mother possessed a strong psi talent."
"She contacted you?" Brad's eyebrows rose to his hairline."
She did. I suggest you keep an eye on the boy."
"Do you believe he has gazal?" If the boy developed Aleyni mind speech abilities, he'd need careful watching. Brad's own family had been fairly accepting but how would Frey react if he discovered his son possessed gazal? And what about the terrorists, who might try to exploit Keth's talent?
Ardaval nodded. "I do, though of course we've never met. Gavin doesn't, or at least if he does, he keeps his mind so locked down it's the same thing."
Brad sighed and rose. He'd completed what he'd said he'd come to do.
"It happens this way with us, at times." Ardaval paused for a moment. "We'll meet again."
Brad turned to leave. He couldn't ignore this connection, wish it away, any longer. Only Ardaval's assurance kept him moving out the door.

Born and raised in New York City, Margaret Fieland has been around art and music all her life. Her poems and stories have appeared in journals such as Turbulence Magazine, Front Range Review, and All Rights Reserved. She is one of the Poetic Muselings. Their poetry anthology, Lifelines, was published by Inkspotter Publishing in November, 2011. She is the author of Relocated, Geek Games, and Broken Bonds, published by MuseItUp Publishing, and of Sand in the Desert, a collection of science fiction persona poems. A chapter book is due out later this year.
Posted by Jean Drew at 1:28 PM