Hello, Callie and welcome to Adventures in Authorland. Please get comfortable and tell us about your adventure.

What inspired you to write your first book?
I had just finished a romance novel and thought to myself I can do this. I had been a writer of one sort or another most of my life. Magazine articles, interviews, and on one of my jobs I wrote for our department’s newsletter. Although I had come up with plots over the years for a book, it wasn’t until that day I decided to actually do it. I took apart one of my favorite books, outlining the highs and lows, the character arcs, and storyline. Then, using that I wrote my first romance novel.

Do you see writing as a career?
Absolutely. And to me it’s a job, like any other. I have certain hours I write, certain day/hours I work on promotion. My husband always laughs when he has a day off from work, and I warn him that he might have a holiday, but for me it’s a workday. Then I shut myself into my office and work. With writing and promotion, I put in more than 40 hours every week.

How many books have you written? Which is your favourite?
I have written 12 books, eleven of which are already out. The next one releases March 10th, THE DUKE’S QUANDARY. I have seven more under contract, yet to be written.

In which genre do you prefer to write and why?
Although I have written and published two contemporaries, I prefer historical. My two favorite time periods are Regency England and American Western. I intend to have two of my books in the Marriage Mart Mayhem series set in Scotland. Then maybe one day do a Highlander book.

Can you give us some details about your upcoming release/s?
The Duke’s Quandary, #2 in the Marriage Mart Mayhem series from Entangled Publishing will release March 10th. The Duke is best friend to Jason, Earl of Coventry from The Elusive Wife. The next book in the series, The Lady’s Disgrace will have an October release, with The Baron’s Homecoming hitting the cyber shelves in December. The last three books of the series will release in 2015.

I’m also continuing my Oklahoma Lovers series with Soul Mate Publishing. The next book in that series, Anyplace But Here, will release early in 2015, followed by Anytime You’re Near, later in the year.

If you could time travel back, or forward, for one day, where would it be and why?
Time travel has always fascinated me, and also spurred me to write a time travel story--A Tumble Through Time. If I could travel back I would pick the late 1800s in New York City. My favorite time travel book of all time <grin> is Jack Finney’s Time and Again. That was set in that time period, and I always thought I would love to be there. The first book in my Oklahoma Lovers series is set in 1889, but during the Oklahoma Land Run. 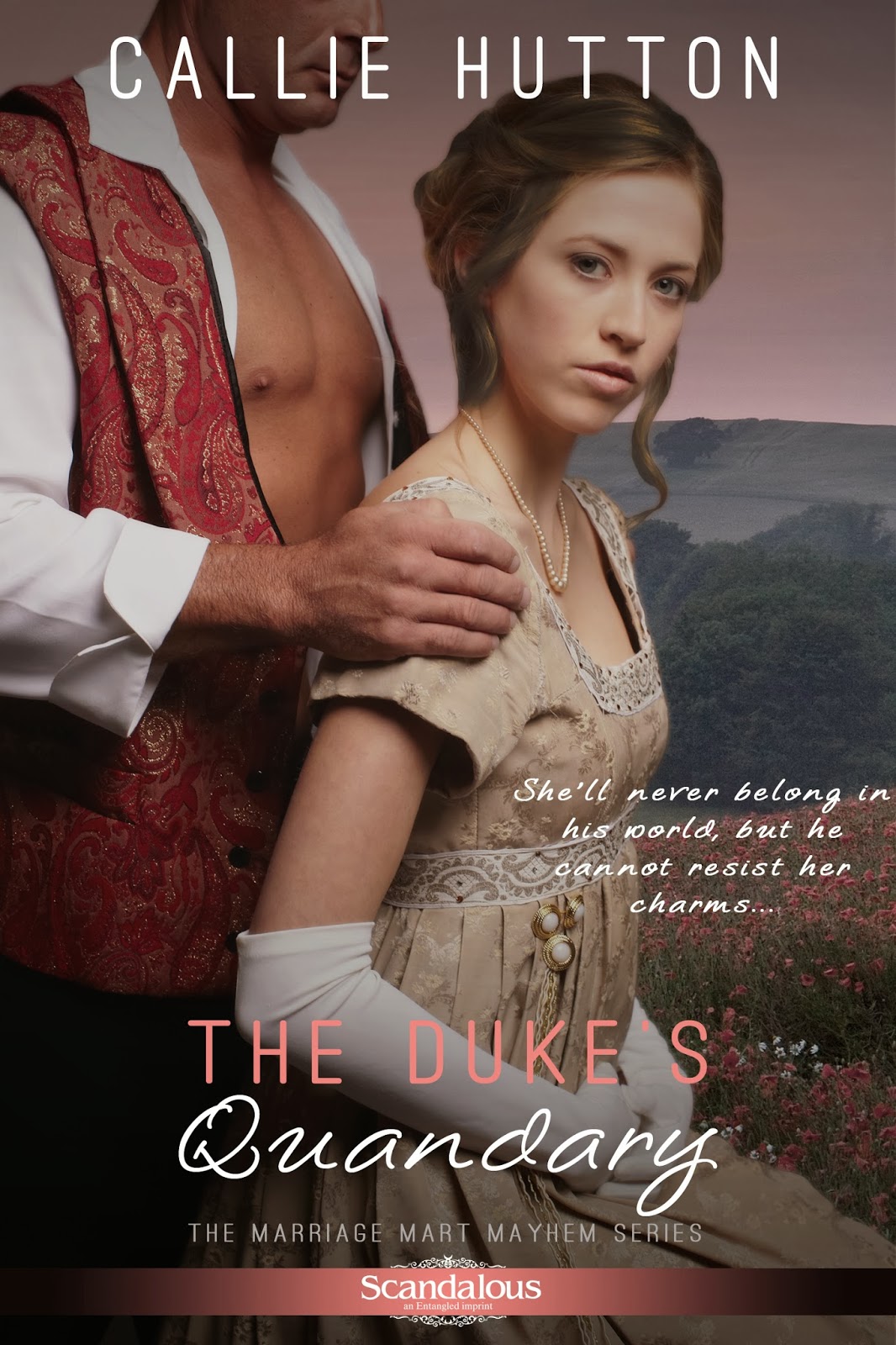 Drake, Duke of Manchester is searching the Marriage Mart for a perfect bride. He wants a woman who is poised, sophisticated, and worthy of the title Duchess. But most of all, he wants a woman who does not want the useless emotion of love.
Socially awkward Miss Penelope Clayton isn't meant for marriage. A serious botanist, she has no desire to wed, so being forced by her guardian to participate in the Season to find a husband is torture. She'll never fit in with the ton, especially if they discover she's been pretending to be a man within the scientific community.
As Drake's family makes over Penelope, turning her from naive bluestocking to enchanting debutante, he is put upon to introduce her to society and eligible bachelors. Despite dance lessons and new gowns, Penelope is the opposite of poised and sophisticated as she stumbles from one mishap to the next. Why then, does he find it so hard to resist her?

Tagline:
She’ll never belong in his world, but he cannot resist her.

EXCERPT:
Drake bounded down the steps. It was unfortunate that Mother’s propensity for rescuing hopeless strays extended to women as well as animals.
He scanned the immediate area, and at first it appeared Miss Clayton had vanished into thin air. Then a slight movement up ahead caught his eye, and he hurried forward. “Miss Clayton, please stop.”
She came to a halt and spun around, taking in great gulps of air. “Please, Your Grace, just let me return to Devonshire. I really do not want to be here.” Her shaky fingers wiped tears from her cheeks, leaving behind a smudge of dirt.
As he grew closer, he could see her squinting, most likely in an attempt to view him since her spectacles were still on the floor in the entrance hall. She gripped her bundle close to her chest, her teeth chattering, whether from the damp night or nerves, he couldn’t tell. But the slight moon reflected her paleness, leaving him wondering if she would swoon any moment.
“We must return to the house.” He reached to grasp her elbow, but she yanked it away.
“No. I don’t belong here, and I just want to go home.” She hiccupped, her huge green eyes pleading with him. Something deep and feral in him softened. The poor girl looked scared to death. And he was sure his rudeness hadn’t helped.
“Please,” he held out his hand. “I wish to apologize for any discomfort I may have caused you. Won’t you return with me to the house? The night air is chilling, and I’m sure you could do with a cup of tea. I know I could.”
She continued to shiver as she stared at him. Apparently coming to a decision, she stiffened her spine, swiped at her tears, and gave him a slight smile. “Yes. A cup of tea would be most welcomed. Thank you.”
Amazed at her quick transformation, he held out his arm and she placed a delicate, albeit, dirty, hand on his sleeve. He tried very hard not to wince, and led her back to the house.

Callie Hutton always knew those stories she made up in her head would be written down one day. There was nowhere else for them to go. After years of writing articles and interviews for magazines and company newsletters, she decided to tackle writing a book. That was back in 2010. Now with twelve books under her belt, and seven more contracted, the relief at having somewhere to tell those stories is wonderful. She lives in Oklahoma with her husband, adult children and three dogs.
Buy links: Amazon: http://amzn.to/1cEfS2r
Barnes & Noble: http://bit.ly/1bzDebf
Kobo: http://bit.ly/1pdjAFz