Hello Molly, welcome to Adventures in Authorland. Please get comfortable and tell us about your adventure.

When did you first consider yourself a writer?
I first knew I wanted to be a writer when I was 7 years old.  I first considered myself a 'real published writer' when I was offered a publishing contract in 2007.

What books have most influenced your life most?
The Romantic Poets, all of Jane Austen's books and EM Forster's A Room With A View.

How many books have you written? Which is your favourite?
I've written more books than I've published.  I've published four books.  I don't really have a favorite.  I like them all because the characters are all so alive to me.  It's like asking me to pick which one of my kids is my favorite.  I love them all.

In which genre do you prefer to write and why?
My favorite genres to write are also my favorite genres to read – Young Adult, Historical, Romance and Mystery.
You’ve recently signed with a publisher. Tell us about your writing journey before and after this point
I've been writing my whole life but didn't seriously pursue it as a career option till my first daughter was born.  You'd think staying home with a baby would make you have less time to write instead of more, but I finished two manuscripts within two months and started working on a third.  I run things through so many drafts.  My writing is always evolving.
Can you give us some details about your upcoming release/s?
My most recent release, HYPERION KEATS, is a Young Adult Literary Mystery about three teens who find a long hidden diary and a secret society who will stop at nothing to make sure the secrets stay hidden.

Do you hear from readers much? What kinds of things do they say?
Readers usually compliment my humor and ear for dialogue.  I've been told “Jane Austen would be proud” of my wit.

What historical person would you want to meet and why?
John Keats.  His poems and life have inspired me most of my life.

Do you have any advice for new writers beginning their adventure?
Tell the stories you want to tell.  Don't chase trends.

Three modern teens, a 200-year-old diary, a literary mystery to solve.
Twelve-year-old Hyperion Frances Keats, great-great grand niece of poet John Keats, hates tip-toeing around her older sister’s “medical diagnosis”.  Why is Isabella so determined to turn her back on what makes her unique in a sea of wannabes?  Is popularity more important than the truth?

The sisters and boy-next-door Will find themselves in the middle of a mystery after discovering a 200-year-old diary written by the girl who inspired the sonnet “To A Lady Seen For A Moment At Vauxhall.”  The teens aren’t the only ones after the answers found in the pages from the past, though.  The LBT Brotherhood – a secret society dedicated to preserving the Romantic Poets three creeds of love, beauty, and truth – want the secrets contained in the diary to remain lost to time and will stop at nothing to silence Hyperion, Isabella, and Will forever. 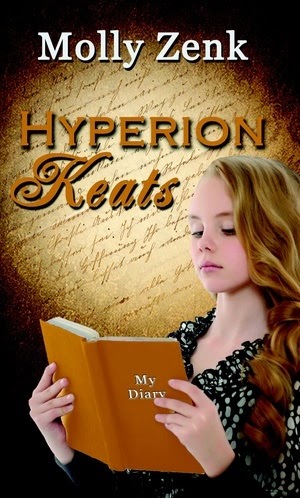 I barely crack the door open before Neighbor Boy launches into a spiel that may or may not be rehearsed—I can’t really tell because he’s talking too fast for me to guess one way or the other. “Hi, I’m not a stalker or anything so don’t get freaked out, okay? But I saw the historical marker in your front yard and had a couple of quick questions if you, uh, don’t mind me, uh, asking. You don’t mind me asking stuff, do you? I can go away if you do.”  He blinks nervously a ton of times in anticipation of me either saying yes and waiting for his couple of supposedly quick questions or no and slamming the door in his face. Why would I say no? He’s the prettiest boy I’ve ever seen up close. Even if boys don’t like to be called pretty, with his huge blue eyes and unruly, anime character hair, that’s the only word that comes to mind. Pretty. My heart does this funny little fluttery jump like I’ve run a mile in under five minutes and I’m positive my palms are too sweaty to shut the door. Even if I wanted to, shutting the door means he’d go away and there’s no way I’m letting that happen. Especially not on my birthday.
“Go ahead. Ask your questions,” I whisper because I seriously doubt I can say it louder even if I wanted to right now.
“Great.” He flashes a lopsided grin that makes my heart fluttering turn into a hammering. “Is this really the George Keats House? Like the real George Keats, brother to the poet John Keats’ house, and you actually live here-live here and not keep it up like a museum or something? Do I have to buy admission because I’m, like, standing on your yard?”
“Um, yes, yes, no, and no,” I field his jumbled together questions in order.
“Really? Are you like direct descendants or did you just buy the house from someone else and decided the historical marker was a cool trick to attract fan boys like me?”
His rapid fire, excited delivery is getting easier to understand. For a second, I think about Isabella by the window seat with her natural light waiting to make her good first impression, and about how Mom always tells me not to talk to strangers because she reads way too much of Nancy Grace’s child snatching Headline News blog, but it’s like my mouth is on auto-pilot as my heart ratchets away in my chest and I answer anything Neighbor Boy asks. “Direct,” I say. “Or Dad is, which makes us too. Mom was just a Romantic Poets fan girl who lucked out by meeting Dad in some college class and marrying in. They both teach at the university. British Lit.”
Neighbor Boy pushes his sandy blond hair out of his face with one long-fingered hand and, I think, even if I don’t like to do manual labor on my birthday, I got the better deal by agreeing to open the front door. While Isabella is hanging out in the kitchen imaging what he’s like, I don’t have to imagine. I know.

Molly Zenk was born in Minnesota, grew up in Florida, lived briefly in Tennessee, before finally settling in Colorado.  She graduated from Flagler College in St. Augustine, FL with degrees in Secondary Education, English, and Creative Writing.  She spent six years using those degrees teaching High School English, Poetry, and Creative Writing before going on “hiatus” to focus on being a stay-at-home/work-at-home Mom.  Molly is married to a Mathematician/Software Engineer who complains about there not being enough “math” or info about him in her author bio.  They live in Arvada, CO with their young daughters, one dog, and one cat.