Hello Cathy, and welcome to Adventures in Authorland. Please get comfortable and tell us about your adventure.

I have a couple favorites. My first book is a time travel romance centered around early rock ‘n’ roll in 1957, and the second book in the series will be another music-themed time travel romance that takes place in the 1970s. I've always enjoyed reading time travel romances (Diana Gabaldon’s Outlander series being my all-time fave!), but mainly it was my love of popular music that inspired me to write WISHING YOU WERE HERE, so I hadn't set out to write “time travels” or necessarily romance. It just happened that way.

My favorite genre to read is suspense—romantic suspense, thrillers, psychological mysteries, you name it. If it has a buried secret, I’m there! :-) So ultimately, that’s where I think long-term my writing will take me. I have one young adult suspense novel near completion and recently plotted a second one while giving a teen writing workshop at the local library earlier this summer.

I was heavily influenced growing up by the early V.C. Andrews books and gothic romances, and I love the middle grade ghost stories by Mary Downing Hahn. A book from my childhood, The Ghost Next Door by Wylly Folk St. John, has stuck with me since I was 10 years old. I’d like to write similar “creepy” books along those lines, but for older teens.

My first book was inspired by a rockabilly song from 1989. It was a tribute song about two musicians from the 1950’s that I didn't know much about when I first heard the song, but the lyrics made me curious to find out more. When I looked the duo up, I discovered one of them sang a song I was very familiar with, but strangely, I hadn't known his name. This piqued my curiosity even more, so I read the singer's biography and discovered he died in a car crash when he was only 20 years old, years before I was born. To say I was shocked would be an understatement. Such great musical talent and…just gone like that. My emotional reaction to learning that boy’s fate inspired the idea for WISHING YOU WERE HERE and is echoed in the opening chapter when my heroine Callie discovers what became of the famous Joey Tempo back in 1957.

Most definitely. And I treat it like a regular day job too. I have a home office, which also doubles as my craft and sewing room, where I keep regular hours Monday-Friday. I thrive on routine, so going to work at the same time every day keeps me productive. I’m not one of those writers who can snatch 15 minutes here or 10 minutes there and write something usable. Sitting down at the desk at the same time each morning is what works best for me. And having the weekends off gives me time to take a break and spend time with my family.

What book are you reading now?
I just finished Home to Whiskey Creek by Brenda Novak (Book 4 in the Whiskey Creek series), which I loved so much I included it on my “Recommended Reads for August” blog post. Now I’m reading 11/22/63 by Stephen King. I hadn’t read any King novels in a while (although I own them all), but in anticipation of the upcoming TV series Under the Dome, I read his novel of the same title last month. It reminded me why I should pick up his books more often. Genius, just pure genuis. The man has a way with characters that I just adore.

The one I remember most recently was War Horse. I hate animals-in-jeopardy movies but wanted to see this one because in the previews it looked so dramatic and moving. And it was. It was a very good film, breathtaking visuals, a lovely story, but I cried during most of it. Just the anticipation of the horse getting in trouble got me going.

1. I love Pokemon. Thanks to my son, I’m like a walking dictionary of names, types and stats. My son’s friends are impressed. LOL! I have my own little pink Nintendo DS (complete with fashionable pink tartan carrying bag) and all the Pokemon games, even some Game Boy ones.

2. I know all the Godzilla/Gamera monsters, their backstories and the movies that feature them. My favorite Godzilla movie is Godzilla Final Wars (2004) because it features so many of the monsters in one film and Godzilla looks bad-ass in it, not all rubbery suit or anything.

3. I’m a champion for beneficial insects and I particularly love praying mantises. Every spring and summer my garden is filled with them. I once counted 20 in only half an hour of searching. I just love to watch them grow from tiny newborns to full-blown adults and frequently move them (yes, by hand. LOL!) to my flowers or vegetable gardens where they clean up destructive pests like aphids and cabbage worms. In the fall and winter I take extra care to protect the egg sacks they leave behind so there’ll be plenty of new babies come spring. 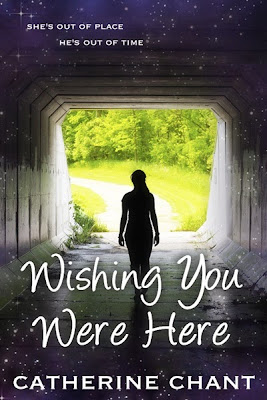 Callie approached the departure area and slowed. Her lack of a plan and a growing sense of what-the-hell-am-I-doing interrupted her frantic actions. What could she accomplish by finding Joey Tempo, anyway? She’d only seen the teen idol in pictures. Would she even recognize him in person? Another few steps and she had her answer. She inhaled sharply
He’d been standing with his back to her, but now he turned to speak to a man behind him. He held a dark blue suit jacket by the collar and casually flung it over his left shoulder. That face! She rested her shoulder against the wall to keep from crumpling to the floor.
"This has got to be a dream," she whispered. "Leah's right. I’ve gone crazy. I'm …hallucinating."
But Joey looked so alive. So real. And so completely and utterly adorable. Crisp white shirt, a blue patterned tie loose on his neck, tan pants. Her heart beat so fast her entire body trembled. Trying to steady herself, she glanced around the airport again. Wake up, Callie. Wake up. She even pinched her arm. But images of 1957 continued to pass before her eyes.
This couldn't be happening. It wasn't possible.
But watching Joey move and talk to the people near him, she began to believe the impossible. He looked like every other person in the airport—ordinary. Except he wasn't ordinary, as far as Callie had deduced from reading about him, and she could not have dreamed him up in such detail. He paced, stealing frequent glances at his wristwatch. She could actually see the worry lines across his forehead.
He's anxious to go home. A lump caught in Callie’s throat. But he won't make it.
Every time he smiled, her heart broke a little more. Why did she have to see this? It had been bad enough to read about it when he was just a picture in a magazine. But now…
Callie’s breath trembled. Standing before her was a living, breathing person. A guy who had no idea he was going to die in a few hours. A boy her age with such phenomenal talent he could make music history.
He was so young, so vibrant… He deserved…
More than he got.
She forced back tears as a sense of purpose rose within her. She could stop this. She could save him. Give him another chance to show the world what he could do. If this was a dream, she'd make sure it had a happy ending.
Callie took a step forward, then hesitated. A group of five girls approached Joey’s party only to be pushed back by two men in dark suits. Her heart sank. Bodyguards. She’d never get near him.
Callie twisted the newspaper in her hands and struggled with indecision. The intercom system sounded overhead.
"…Global Airlines flight 632 is now boarding at gate three…"


Joey and his group reached for their carry-on luggage and something in Callie’s mind snapped with terrifying force. Hundreds of thoughts and emotions battled inside her, but she focused on only one. Save Joey.

Catherine Chant is a PRO member of the Romance Writers of America (RWA) and a Golden Heart® finalist. Her first novel, WISHING YOU WERE HERE (Soul Mates #1), is a young adult time travel romance available in both print and electronic editions at Amazon.com.

Catherine worked for 15 years as an IT computing & communication consultant at Boston College before becoming a full-time writer. She currently teaches four online workshops for writers at various RWA chapters throughout the year. Her non-fiction work has appeared on numerous websites where she writes instructional articles about computing, gaming and crafts.

Catherine is currently working on a new young adult suspense novel, and the next book in her Soul Mates series. You can find out more about Catherine at her website CatherineChant.com, Twitter @Catherine_Chant or Facebook Catherine Chant Novels.