Hello, Barbara and welcome to Adventures in Authorland. Please get comfortable and tell us about your adventure.

Just finished reading Mrs. Lincoln’s Dressmaker by Jennifer Chiaverini. My book club is going to discuss it this fall. Although what is commonly known as “Mrs. Lincoln’s Quilt” appears near the end, this book really focuses on Elizabeth Keckley, Mary Todd Lincoln’s dressmaker, called a modiste then. Keckley was a former slave who bought her freedom and established a career fashioning the dresses of several prominent women in Washington, D.C. in the 1860s. The book also explores Keckley’s friendship with the First Lady, its high points up until the assassination of the President and its low points, as the former First Lady descended into melancholy and what may have been madness following her husband’s death. Although my master’s degree is in American History, I don’t write historical novels, but every so often I like to read a fictionalized tale about real historic events.
I’ve just started to read Bayou Born by Linda Joyce. I met Linda at the Romantic Times Convention in May and immediately saw a kindred spirit in her since we both write for the same publisher.

I see writing as a career when it comes to adhering to the terms of my contracts, acting professionally, promoting my work, and earning royalties, but I see it as my passion when I can’t keep myself away from the keyboard when a story continues to unfold.

I’ve completed seven manuscripts. Three have been published or are in the process of being published. I have two favorites: And He Cooks Too and Tough Enough to Tango. They are my favorites for the same reason: both required me to dig deeper than I normally would to write my characters’ stories and explore their strengths and weaknesses. Although I love to write lighthearted romances, the more I write, the more I realize I have to humanize even the most comedic situations.

I write contemporary romances. Like I said above, I especially like romantic comedy, creating funny situations and witty (if I could be so bold) dialogue, because I think making someone laugh, or at least smile, is a priceless talent. However, I’m tempted at some point to try my hand at paranormal and inspirational. I’d also like to try something someday outside the romance genre, something that has an appropriate ending but not necessarily a happy one. Is that blasphemy for a romance writer? I don’t think so. I think it’s a storyteller spreading her wings, exploring new paths.
I also want to write cozy mysteries and screenplays. Ambitious plans for a retiree who also enjoys Mah Jongg and spending time with friends.

DRIVEN TO MATRIMONY, The Wild Rose Press, is coming out sometime later this year or early in 2014; I don’t have a release date yet. It’s as close as I've come to writing a screwball comedy.

Dina Maitland spends almost as much time extricating her movie star mother from personal messes as she invests in her forensic accounting job. So much time, her job may no longer be there once Dina returns from cleaning up her mother’s latest fiasco, her engagement to a twenty-year-old film student. Vowing it’s the last time she puts herself on clean-up duty, Dina sets off for South Carolina to stop the pending nuptials and along the way, almost literally, runs into the father of the groom, Ben Cutler.

Single father Ben can ill afford time away from his business, with his competitors threatening to appropriate his new product, yet his son takes priority. Little do they know when they team up to prevent the nuptials they will wind up in a more personal alliance of their own.

Who are your favorite authors?

I have three authors’ pictures hanging in my office: Nora Roberts, Janet Evanovich, and Linda Howard. I admire their work for different reasons. I go to Nora when I need inspiration to write poetic narrative; she has a way of turning a phrase like no one else. Linda is the great plotter. I have trouble putting down her books, because there’s always another twist coming. I’m a fan of multiple twists, as long as they make sense and don’t turn off the reader. And Janet, well, of course, she’s the one who provides humor. I would also include two others, although I don’t have their pictures framed: Susan Elizabeth Phillips for the way she tugs at the heart and Kristan Higgins, because she’s the one who comes closest to my writing style.

Learn the requirements of the industry, but find your own voice and tell your own story. Join at least one writers’ group, and when you’re ready, seek feedback. Read as much as you can in your chosen genre as well as other areas that interest you, but more than anything else, just write. Write every day.

I don’t like to cry in public, so when a movie brings a tear to my eyes, I fight it, which usually results in a horrible headache afterwards. And sniffles. If I do resort to a tissue, I make quick dabs at my eyes and otherwise act as if I’m still cool. However, I couldn't help myself when I saw “Les Miserables” last winter. I’d seen the stage play, I knew how it ended. In this case, despite Victor Hugo’s powerful story, it was the production itself that made me cry. Some critics have panned the film, but for me, it was a celebration of the incredible score, cast and direction blended with the story of a remarkable time in history and what it had to say about courage and loyalty and love. I cried again when almost the entire cast reassembled for a medley at the Academy Awards ceremony in February. 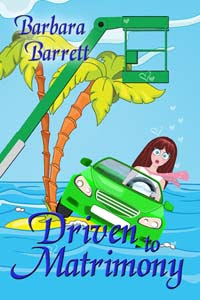 Ben Cutler spotted the out-of-control sports car staggering for the open road as soon as he entered the parking lot. It moved in fits and starts, then seemed to gain speed as it headed directly toward him. Only quick reflexes and a last-minute dive out of the vehicle’s path saved him from an otherwise painful impact. The woman was a demon! Had she deliberately tried to mow him down?
He dismissed the notion as the car continued to swerve back and forth across the roadway only to veer off and skid down an embankment. There it came to rest, sinking into what, from where he stood, looked like marshland.
Had she injured herself? He broke into a fast trot and headed down the road to check. Foolish woman. Taking off like a runaway train when she obviously didn't know the first thing about operating a stick. Just like so many so-called modern women. Independent. Know-it-all. Until they needed help, and then, no matter what a guy did, it wasn't what they wanted.
Ben slowed his pace when she emerged from the vehicle only to step into the muddy bog. Whoa! That misstep wasn't going to improve her mood.
He couldn't have called it better.
She struggled to unplug one foot from the gunk. When she finally succeeded, it was unclear whether a shoe still remained or had been left behind, buried, because dark mud covered the entire appendage. In order to remove the other foot, she was forced to stick the first foot back in the muck, and this time, it seemed to sink even deeper. As she realized the depth of her predicament, her reaction transformed from surprise to dismay to anger.
He could have sworn he heard epithets not becoming a lady, but he wasn't close enough to discern her exact words.
She appeared unharmed, though she’d probably never wear those shoes again.
He should be furious with her for leaving him behind and almost mowing him down. But despite her actions, her gyrations fascinated him as she tried to figure out the extent of the car’s troubles and how to extricate both herself and the little sports car from the quagmire. She was kind of cute trampling through the mire, tentatively lifting one foot, then the other to inspect the damage. She bent over and his breath caught. Cute became curvaceous.
She tromped back to the car, got in, and discarded her shoes, pitching them over the door to the outside with a vengeance. Nothing happened when she attempted to restart the vehicle. It wasn't even grinding or kicking up mud. Just emitting a half-hearted gurgle. She leaned over the door and frowned at her slimy surroundings. Despite the sleek cut of the auburn hair that hit just above her shoulder, she looked pathetic and vulnerable.
Ah, hell, he needed to get moving. Time to put her, and the car, out of their misery. “Interesting parking technique, sinking it in the mud. Myself, I prefer the brake.”

Barbara Barrett spent her professional career as a human resources analyst for Iowa state government, and that training has stayed with her in her writing of contemporary romance fiction. Now retired, Barbara spends her winters basking in the Florida sunshine and returns to her home state of Iowa in the summer to “stay cool.” Her first two books, The Sleepover Clause, Crimson Romance, and And He Cooks Too, The Wild Rose Press, were published in the past year. A third, Driven to Matrimony, TWRP, should be released by late 2013 or early 2014.
Posted by Jean Drew at 2:55 PM