Welcome back, Barbara. Please get comfortable and tell us about your latest adventure.

Thank you Jean for having me back here at Adventures in Authorland!  I’m looking forward to chatting.

What books have influenced your life most?
I’d have to say I was most influenced by the children’s books I read as a child, because they’re what got me hooked on reading and writing, which are the two most important passions in my life.  I started with mysteries, from The Bobbsey Twins and Encyclopedia Brown books up through the middle-grade to young-adult level Nancy Drew, The Hardy Boys, and Trixie Belden.  And of course, with those young adult books, there was a touch of romance thrown in, which led to my loving that genre.

In which genre do you prefer to write and why?
Romance, always, because I love a happy ending and I love writing about relationships.  Because romance is so character-driven, I can delve deeply into what drives my story folks—even if much of the info about their backgrounds never makes it between the covers of a book.
I also love romance because in the type of books I write, I can incorporate quirky secondary characters and towns that almost become characters in their own right.

Have you ever cried during a movie? If yes, which one and why?
Oh, my gosh!  We don’t have enough space here for me to give you the list.  I’ll cry if the movie’s sad, if it’s happy, if it’s poignant….   I cry every time Dorothy taps her ruby slippers together and says, “There’s no place like home.”  And I choke up over made-for-TV movies, long-distance telephone company commercials, and Hallmark greeting cards.

If you could time travel back, or forward, for one day, where would it be and why?
This is such a tough question, as I have so many dates I’d like to investigate!
But I’ll go with December 14, 1926, the day mystery great Agatha Christie (one of my idols) was discovered at a hotel in Harrogate after an eleven-day disappearance following an automobile accident.
Her husband was having an affair, and Christie was found to have checked into the hotel using the name of her husband’s mistress.  It’s said that she suffered a type of trauma-induced amnesia due to the accident, and that from the time she was found until her death in 1976, she never spoke a word about her disappearance.  Because she’s my idol, I’ve always wondered what happened in those days she would never discuss.

If you could have any super hero power, what would it be?
This isn’t a super-hero power but a paranormal one.  Because I’m so interested in people and what makes them tick, I’m fascinated by psychometry.  This is a psychic ability that allows a person to hold an object and, through that touch, be able to tell its history, as well as being able to pick up on the thoughts and emotions of other people who have held the same object.

Can you give us some details about your upcoming release/s?
Yes, thank you for asking!
THE TEXAN’S LITTLE SECRET debuts next month.  It’s the story of Carly Baron, the wild child of an influential Texas family, and Luke Nobel, a single dad and the manager of the Baron family’s ranch.  After years away from home, Carly returns and becomes involved in a search for her birth mother, who abandoned their family when Carly was a child.
While Carly and Luke have a shared past, she has a secret she can never share with him.  It’s a secret with a twist that has haunted her since she left home—and Luke—years ago.
I’m also happy to share I’ll have more books out with Harlequin American Romance.  The Hitching Post Hotel is a three-book series that begins in 2015.  The series revolves around a small family-owned hotel and a matchmaking grandpa who plans to find mates for his granddaughters—whether they want them or not! 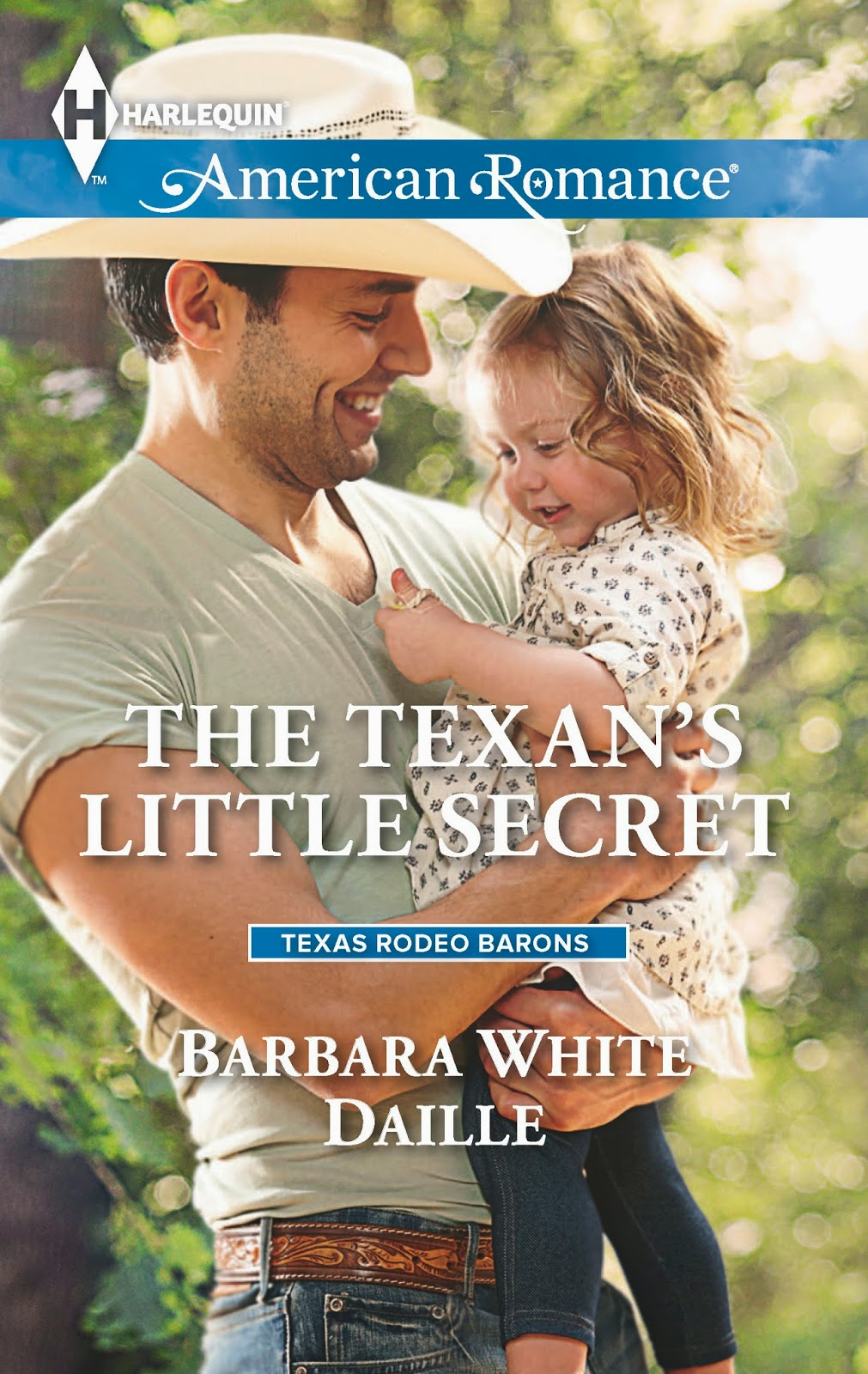 Coming home might be the worst decision Carly Baron has ever made. Each minute on her family's busy ranch is one minute closer to seeing him—her first love—the man who broke her heart seven years ago. While coming face-to-face with Luke Nobel again brings back painful memories, Carly quickly realizes there are other strong feelings just under the surface….
Luke would be a lot better off if Carly had stayed away. Being a single dad to an adorable two-year-old girl and managing the Roughneck is tough enough, but resisting the sparks that fly whenever he and Carly are together is near impossible. But first she must tell him her secret. The truth could heal their past…or forever destroy their chances of becoming a family.

Excerpt:
The cowboy standing in the barn doorway started toward the truck, his long legs in worn jeans eating up the space more rapidly than she'd come up the drive.  He wore a battered Stetson, the wide brim shading most of his face, but no matter how much she tried to convince herself this was just any old cowhand striding toward her, she couldn't believe the lie.
There was no mistaking those mile-wide shoulders or that sandy-blond hair.  No mistaking the way her heart pounded.
The last time she'd seen Luke Nobel, he had turned and stalked away from her in anger, leaving her teenaged heart crushed in the dust beneath his boots.  To this day, she hadn't healed right, and probably never would.
She wasn't ready for this meeting.
He wasn't giving her a choice.
Seconds later, he halted within arm's reach of her driver's door, his eyes seeming to hold the power to pin her into her seat.
All these weeks of worrying, and here was the one situation she had wanted to avoid.  All the years of running, and here stood the one man she'd tried so hard to leave behind.
"Carly Baron," he said.  "At last...."

Originally from the East Coast, award-winning author Barbara White Daille now lives with her husband in the warm, sunny Southwest, where they love the lizards in the front yard but could do without the scorpions in the bathroom.  Barbara writes romances—usually with cowboys, kids, and a touch of humor.  Her current title is Rancher at Risk, and she’s excited that her upcoming book, THE TEXAN’S LITTLE SECRET, releases in less than a month!

Barbara would love to have you drop by her website:  www.barbarawhitedaille.com