Hello Cynthia, and welcome to Adventures in Authorland, Please get comfortable and tell us about your adventure.

A Conversation With Laura Bainbridge

Meet Laura Bainbridge, heroine of Keeper of the Light, Book II of The Wild Geese Series. A romantic dreamer, she envisions a life very different than the one she’s always known. I was privileged to sit down in the cozy, fire lit parlor of Spirit Lighthouse, where her father is the lighthouse keeper, and ask her a few questions. 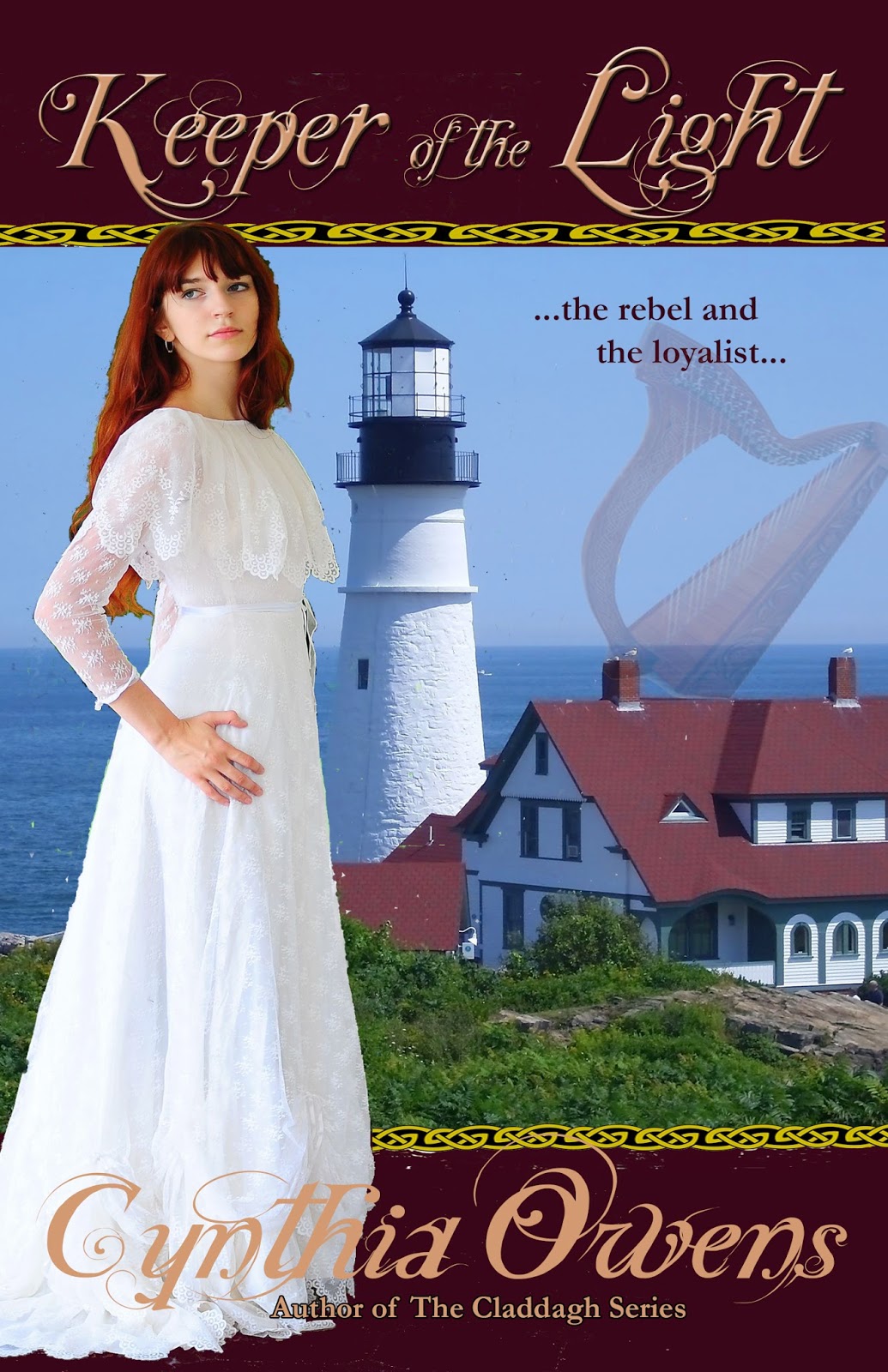 What was it like growing up in a lighthouse on an island in the middle of the Atlantic Ocean?
Turtle Island is a world unto itself, just off the coast of New Brunswick, British North America. I loved growing up there. It’s a place where you know everyone, and everyone knows you. There are beaches and tidal pools. There are caves where my friend, Gil Forbes, ages his wonderful cheese. Of course, we’re a bit cut off from the world in winter, but in the summer months, a tender arrives every few weeks, bringing supplies and mail and the latest news from the mainland.
We even have our own ghost. Her name is Helena Bodewell, but we call her the Lady of Turtle Island. She was drowned many years ago, fleeing the island with her lover. It’s such a romantic tale. She roams the island on stormy nights, calling for her lost love. They say if Helena meets the gaze of a mortal, then that mortal is destined to fall in love.
Romantic indeed. Your mother was English, and you have British roots. Have you visited England?
Most of the inhabitants of Turtle Island are descended from the United Empire Loyalists, who refused to foreswear their loyalty to the Crown when America declared her independence. I’m very proud of those roots, and consider myself a loyal subject to Mother England.
When I was about five years old, my mother brought me to England to meet her family. I was enchanted. London was wonderful, full of bustle and excitement and color. Much as I love Turtle Island, there’s a great big wonderful world out there, and I want to experience all of it. I still have family there, including an aunt who promised to sponsor me a London season. Imagine…all the parties and balls, the hunts. And being presented to Queen Victoria! I can imagine nothing more exciting! Her gaze drops shyly to the gold ring adorning her finger. Well…almost nothing.
I guess you don’t meet many strangers on your island.
Actually, we have. We often rescue sailors blown off-course in a storm. My father, who is the lighthouse keeper, still corresponds with a Danish sailor whose ship ran aground on the island. She blushes, her lashes fluttering. And of course, Cathal washed ashore in that terrible storm last spring. And even though he had no memory of who he was, or how he got there, he changed my life forever.
What’s the worst thing you’ve ever done to someone?
I allowed the man I adore to make love to me.
Why was that so terrible?
It was a terrible thing to do because I loved him…and because he loved me. But he didn’t know who he was then…didn’t know who I was… Her voice catches on a sob. Cathal is Irish, you see. He fled Ireland during the hunger, and the things he suffered… a hard shudder, and her eyes fill with tears… no child should have to live through such times. It changed him, you see, made him into a hard, bitter man. He wanted to set Ireland free, and he’d stop at almost nothing to achieve that aim. Whereas I…I was—am—descended from the Loyalists. English. Everything Cathal hated.
I let him make love to me, and I made love to him, knowing he’d forgotten who he was, and I prayed his memory would never return. For if it didn’t, I thought, I could keep him. He’d be mine forever.
But his memory did return, didn’t it?
It did, and for a while, Cathal left me. I believe he hated me for a time—but then, love and hate are very often opposite ends of the same stick, aren’t they? We love each other for who were are, even as Cathal hated me for being English. A radiant smile suddenly lights her face. But we worked it out. We both had to come to terms with his past, and with the future I had planned.
And do you believe you can live happily ever after, even with someone so very different from yourself?
Oh, I do! Because underneath everything, we truly love each other. Cathal would do anything for me—even renounce his vendetta against the English. And I would do anything for him. I dreamed of a Season in London, but I gave up that dream for a lifetime on Turtle Island with Cathal and our children.
Children?
Laura smiles, and her hand strays to caress her abdomen. Yes, children. Cathal doesn’t know yet, but my dear friend, Cally Forbes, just told me. I can’t wait to tell Cathal. He lost so many members of his family, both during the hunger and on the coffin ship that brought him to America. A single glistening tear of joy slides down her cheek. Now we’ll create our own family. And we will live happily ever after.

Blurb: KEEPER OF THE LIGHT

Like the Wild Geese of Old Ireland, five boys grew to manhood despite hunger, war, and the mean streets of New York…

She was everything he despised…but he didn’t know it
Cathal Donnelly washed up on the shores of an Atlantic island one stormy night, with no memory of who he was or why he was there. But is his lovely rescuer his salvation…or his doom?

She dreamed of a very different life
Laura Bainbridge has spent her entire life on tiny Turtle Island, but she dreams of a Season in London and a presentation to the Queen. Can a handsome Irish stranger with a golden tongue and a disturbing past change her heart and convince her to stay?

As Cathal’s memory slowly returns, both he and Laura must come to grips with his painful past…and fight for a future free of hatred and loss.

“Cathal, lad, look at me. Look at me now, and tell me why ye’re here.”
Cathal Donnelly’s soul shrank as the priest grasped his chin between long, bony fingers and forced his reluctant gaze up to his face. Father O’Reilly’s black robe flapped and snapped in the chill spring wind that slashed Cathal’s own skin. The gulls screaming over the sea like banshees sent shivers down his spine. He caught his lower lip between his teeth, struggling to control his shameful tears. “We’re going to America, Father.”
“And do ye know why ye must go to America?”
“Because we’ve no food, Father.”
“Ah, now that’s where ye’re wrong, lad.” Father O’Reilly glanced over to where Cathal’s family huddled together on the shore with hundreds of other emaciated refugees waiting to board the Sally Malone. Then he knelt before the ten-year-old boy, his dark-blue eyes blazing, his hands biting into his flesh. “Ye must go to America because the English decided ye’ve no food, Cathal. England starved ye, abused ye, and when ye dared to cry out for help, she turned blind eyes and deaf ears. Where has all the grain gone? And the cattle and the pigs and the sheep? All gone to England.” The priest waved a bony hand toward the quay, where huge, many-masted ships filled with food and livestock waited to sail. “All of it sent over the water so England may grow fat while Ireland starves. Do ye realize that, Cathal Donnelly? Do ye, lad?”
“Aye, Father.” Cathal widened his eyes in awe, pride swelling his heart and puffing out his thin chest. No one had ever talked to him this way, as if he were grown up. As if he understood. He’d heard the whispers in the back room at Phelan’s pub, or when the men were digging the praties before they’d turned to black slime in the pit. But never had anyone told him why they must send their own food away. “I understand.”
“Remember it then, lad. Remember it all—the hunger, the evictions, the cruelty. Remember it, and tell yer children, and in time their children. Will ye do that for me, Cathal Donnelly?”
“Aye, Father, I will.”
“The English drove ye from yer land.” Father O’Reilly’s voice shook with emotion. Tears sprang to his eyes and rolled down his cheeks, and Cathal’s heart twisted for the priest’s grief. “Don’t ever forget that, lad. Keep the memories alive, so that one day, please God, the wrongs done to our people will be righted.”
Blinded by tears that had nothing to do with the sharp salt wind blowing off the sea, Cathal clenched his fists, his soul crying out for justice. For vengeance.
“I promise, Father.”

I believe I was destined to be interested in history. One of my distant ancestors, Thomas Aubert, reportedly sailed up the St. Lawrence River to discover Canada some 26 years before Jacques Cartier’s 1534 voyage.
Another relative was a 17th Century “King’s Girl,” one of a group of young unmarried girls sent to New France (now the province of  Quebec) as brides for the habitants (settlers) there.
My passion for reading made me long to write books like the ones I enjoyed, and I tried penning sequels to my favorite Nancy Drew mysteries. Later, fancying myself a female version of Andrew Lloyd Weber, I drafted a musical set in Paris during WWII.
A former journalist and lifelong Celtophile, I enjoyed a previous career as a reporter/editor for a small chain of community newspapers before returning to my first love, romantic fiction. My stories usually include an Irish setting, hero or heroine, and sometimes all three. I’m the author of The Claddagh Series, historical romances set in Ireland and beyond. The first three books in The Claddagh Series, In Sunshine or in Shadow, Coming Home, and Playing For Keeps, are all available from Highland Press. Deceptive Hearts and Keeper of the Light, the first two books in The Wild Geese Series,  are also available from Highland Press.
I am a member of the Romance Writers of America, Hearts Through History Romance Writers, and Celtic Hearts Romance Writers. A lifelong resident of Montreal, Canada, I still live there with my own Celtic hero and our two teenaged children.