Ella's inspiration comes from the Regency

Hi Ella and welcome to Adventures in Authorland. Please get comfortable and  tell us about your adventure.

I think this is an important question. During the first draft of the first book I wrote, I considered myself a writer. I see so many people who describe themselves as “aspiring writers.” You either are a writer or you’re not. If you’re making up stories and writing them down, you’re a writer.

I do know that it sometimes takes a bit of encouragement for people to claim being a writer. Diana Love told a funny story about being at a writers’ conference early in her career. Person after person asked her if she was an author, and she kept saying no, those other people are. Then a tall, good-looking guy asked, and she replied. “Yes, I am.”

I’ve written seven. Four of them, The Seduction of Lady Phoebe, The Secret Life of Miss Ann Mash, and Lady Caro’s Accidental Marriage are complete and sold. They comprise the first four books of my series, The Marriage Game.  I’m editing the fifth book now.

Two are from a detour I took during Nanowrimo, and will be the first two books of my second series.

I have to say I love them all. Lady Phoebe may edge out the others just the tiniest bit, but only because she was the first.

Although the story is long, it’s actually been pretty fast. Just over two years ago, I started out doing what most authors do. I wrote a book, then wondered how to sell it.

In May I joined a general writers’ forum, and discovered that I actually needed to revise my book. What you mean it’s not perfect now? Aren’t editors supposed to fix anything that’s wrong? Apparently not. Oh, and there was something called POVs I was supposed to get a handle on, and don’t forget craft. It took me a couple of months to actually figure out what POV was, but I digress.

The Brenda Novak Auction was in full swing, and I won a critique with an agent. She ended up telling me I needed to work on my craft (there was that pesky word again), but she thought I’d be published. Well, I can tell you that was all I needed to start sending Lady Phoebe out on queries. Imagine my surprise when I received rejections. They, however, did not deter me. By then I’d heard a lot about rejections and figured it was part of the process.  In June I’d I heard about RWA, and immediately signed up, found a couple of special interest chapters and joined them as well. I also took the rejections and parlayed them into PRO status.

I have to say that had it not been for that I would not have found a couple of wonderful critique groups that ended up helping me get my MS to the point where they were ready for submissions.

During all of this, I was writing Lady Serena and entered several of contests. In fact, if you count up the number of contests offered between July and September, that would be the number. Judges either loved my submission or hated it. There was loads of advice, some useful, most not. One published author, I wish I knew who it was, made a comment that made up for all the negative remarks.

By September of that year I was editing Lady Serena and writing Anna Marsh. In October I attended the RWA New Jersey regional conference, met some wonderful authors, and pitched Lady Phoebe. I was thrilled to get requests for partials. In November for Nanowrimo I wrote Lady Grace’s Rendezvous (one of my detours), and in December started querying Lady Serena. That was when I started receiving requests for fulls. On February 1st I signed with my agent.

She handed me over to her lovely assistant, Claire Cavanaugh, who taught me how to edit and polish my books.  In December I received the offer from Kensington.

I love to read, travel, and being in the water. I paddle board at least once a week. I help out with the local races on the race committee and when Rolex is down here for their international regatta. I greatly envy a friend who has taken off and is sailing the world. I just want my own sailboat, but I would like to hang out in the Med on it for a summer.

I’d love to visit the Regency era and gather up as much knowledge as I could, especially about some of the things we debate about.

Ever since I first saw the TV show, Bewitched, I’ve wanted to be able to wiggle my nose and get things done or be somewhere.

EXCERPT FROM  DESIRING LADY CARO
I’m extremely fond of two of my secondary characters, Lady Horatia, and John Whitton. So, I decided to give you an excerpt with them in it. 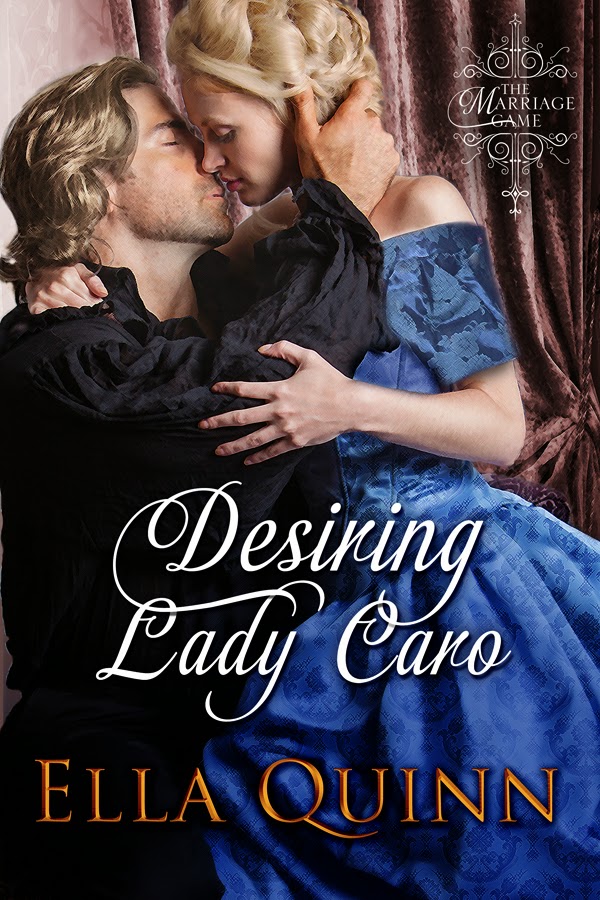 “Oh!” She glanced up. Captain Whitton. Her breath caught. “Good day, Captain.” His hand seemed to burn through the thin cashmere of her gown and three petticoats. This was not good. She didn’t need a man to offer her carte blanche again. Even if he was sinfully handsome and her body responded to him as it never had to anyone. His heat soaked into her. No, she could not do this. Whatever this was. “I was just going . . .”
Horatia’s voice faded. He stared down at her. His eyes twinkled with humor. Her gaze dropped to his lips, tilted once more into his crooked smile. The dimple made an appearance, and her lips tingled in response.
His arm tightened, causing her breasts to brush against his coat. A shiver shot straight to the apex of her thighs, and she stopped breathing. Horatia closed her eyes, resisting the urge to rub against him like some wanton cat.
She inhaled and opened her lips to tell him they were standing much too close together and he really shouldn’t have his arm around her. Oh Lord, he looked as if he’d like to devour her.
Slowly, he bent his head, kissing and nibbling his way from the edge of her lips to the center. By the time he got there, her mouth opened, wanting him, begging him to continue. His tongue ran across her teeth, teasing. When she could stand it no more, she put her hands on his face and caressed his tongue with hers. He tasted like tea and the ocean. He lifted her as he tilted his head, and she pressed into him, moaning. After several moments, her brain finally caught up with her long-starved senses. What was she doing, kissing him like this? She tried to jerk away. “Captain Whitton.”
The indignation she’d tried to infuse into the words didn’t come out quite as she’d planned. Her voice was much too soft and breathy, as if she meant to encourage him rather than the opposite. She put her hand on his chest and pushed. He loosened his hold but didn’t move away. She could not allow this to happen, not now. She had too many duties to focus on.
Horatia tried again. “Captain Whitton, I may be a widow, but I am a chaste widow. I do not engage in love making outside of the marital bonds.”
“Very well.”
As his head bent to kiss her again, she hauled back one arm and slapped him.
Whitton’s head jerked up with a frown. “What the deuce was that for?”
“I told you…”
“Yes, you told me you had to be married to make love with me, and I agreed.”
Something was terribly wrong with this conversation. She narrowed her eyes. “Agreed to what?”
“Marry you, of course.”
All the air rushed out of her as if her lungs were a bellows. “Marry me? Have you lost your mind? Or do you go around suggesting marriage to every lady?”

AUTHOR BIO
Amazon and Barnes & Noble bestselling author Ella Quinn’s studies and other jobs have always been on the serious side. Reading historical romances, especially Regencies, were her escape. Eventually her love of historical novels led her to start writing them.

She is married to her wonderful husband of twenty-nine years. They have a son and granddaughter, Great Dane and a Chartreux. After living in the South Pacific, Central America, North Africa, England and Europe, she and her husband decided to make St. Thomas, VI home.

Ella is a member of the Romance Writers of America, The Beau Monde and Hearts Through History. She is represented by Elizabeth Pomada of Larsen-Pomada Literary Agency, and published by Kensington.