Scandal and danger in Regency England

Hi Jane, and welcome. Please make yourself comfortable and tell us about your adventure.

I actually played around for a while, then joined the online group Ozromance and met Ellen Ben-Sefer on line who wanted someone to critique her current book. Actually I had no idea what critiquing was but held my hand up.  Ellen and I had a lot in common, had both lived in Israel and travelled a lot.  We ended up writing 2 books together before we’d actually ever met.  That first book was Woman of Valor, which was subsequently published.

I’ve written about 15 books, not all published!  He’s The One is one of my favourites – it’s a contemporary and quite quirky.  But my next release. THE HIGHWAYMAN’S BRIDE (Entangled/Scandalous release 9 December) is a Regency and again a bit quirky in that the heroine is a highway robber.  Very adventurous for those times.

Oh, I was going to be a queen, not even the princess, but a queen.  I suppose I can call myself the queen of the house, or housework!
Have you ever travelled to a place and come away with a story unexpectedly?

Actually, yes.  I ‘travelled’ to hospital and ended up staying there for four weeks, and I remember watching the clouds pass across the sky from my bed. I wondered what it would be like travelling on a cloud, and maybe even falling off – that inspired To Kiss an Angel, a great holiday story for right now.

What historical person would you want to meet and why?

Cleopatra because of her strength in what must have really been a man’s world.  Imagine all that power, but then I’m not a great fan of bathing in ass’s milk – wonder if I’d come out smelling like a donkey?

To the court of Henry VIII to really see what he was like – a despot? Or just a randy bloke? Did those women marry him for love, or was it simply power or fear?  It would be nice to be a fly on the wall, as long as he didn’t swat me! 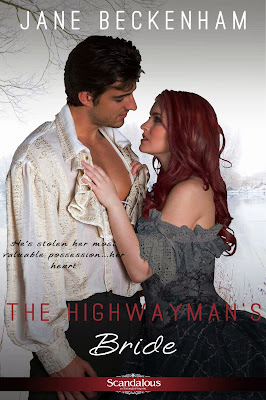 England, 1813
Forced into a marriage . . .
Compelled by her uncle to marry a man who has a predilection for violence, Tess Stanhope resorts to a ploy from her favorite novels to fund an escape—highway robbery. But her attempt is botched by a maddening, handsome rogue named Aiden.
Driven by revenge . . .
Aiden Masters, the Earl of Charnley, is hell-bent on avenging his sister’s brutal treatment at the hands of the criminal Florian Nash. He single-mindedly seeks vengeance at the expense of all else—even by furtively roaming the highways at night.
Blackmailed for love . . .
At a London party Tess meets up with Aiden once again and blackmails him...marry her or she’ll divulge to society his clandestine life as a highwayman. She desires a marriage in name only—but the more time they spend fighting their desire, the closer they come giving in.

Excerpt:
The Highwayman’s Bride
Her mind reeled at his closeness, a sensory world of heat and touch. Of sinful thoughts. Concentrate. Stick with the plan.
What plan? This had been a spur of the moment idea. Now she had to make it work.
A flurry of nerves and fear coiled tight in her gut. This man was big. Her gaze dropped to his hands. Big hands. Hands that could break her with one flick of his wrists.
Tess knew she tempted him, which was exactly as it needed to be if she were to succeed. Then he did something she hadn’t expected. He lifted a hand to her neck, scraping the back of his fingers along its curve. Her breath hitched for a heartbeat.
Do it, Tess. He’s your only hope.
“I desire the independence of a married woman,” she said in a rush.
His eyes darkened to the color of the deepest night sky. “And?”
The tip of her tongue slid along the rim of her mouth, and butterflies fluttered in her stomach. “Marry me, Aiden, and you’ll never see me again. Marry me, or I will announce to the world your penchant for robbery.”
His hand fell away, his expression instantly stony. “You are either very brave, Tess Stanhope, or extremely foolish.”
“I know what I want.”
“So do I.”
Then he kissed her—and that changed everything.

Multi-published author Jane Beckenham discovered dreams and hope, stories that inspired in her a love of romance and happy ever after.  Years later, after a blind date, Jane found her own true love and married him eleven months later.
Life has been a series of  ‘dreams’ for Jane.  Dreaming of learning to walk again after spending years in hospital. Dreaming of raising a family and subsequently flying to Russia to bring home her two adopted daughters. And of course, dreaming of writing.
Writing has become Jane’s addiction - and it sure beats housework.