Hi Debby, and welcome. Please get comfortable and tell us about your adventure.

I have to give a little background about myself to answer this question. I was born with a deteriorating eye disease called Retinitis Pigmentosa. This disease eventually causes either extremely low vision or blindness. I lost my ability to read print in my early twenties, but even when I could see print, reading was always difficult for me so as a child I entertained myself by making up my own stories. Becoming an author was always in the back of my mind, but until the development of computers and screen reading software writing was impossible for me.

I had an obnoxious neighbor who I thought would make the perfect murder victim. At the time my husband and I were living in a historic neighborhood which, except for my neighbor, I loved. I conjured up numerous plots in which he met his death. Each year we held our annual Christmas tour of historic homes and I decided to use this as the background for Decorated For Death and my neighbor’s demise.

I’ve written four books. Decorated for Death, a mystery cozy, was my first.  But it’s full of beginner writer mistakes, so I’m currently rewriting. The second, THE SILVER CRESCENT, scheduled for release on January 30, 2014, by The Writer’s Coffee Shop Publishing House, is a highly charged romance with a murder mystery and a treasure hunt, all helped along by a couple of Victorian ghosts. My third, Rue Toulouse, a contemporary romance set in New Orleans, will come out in January, 2015. My fourth, His Magic Touch, a work in progress, is a paranormal romance also set in New Orleans. Of these, Rue Toulouse is my favorite. My husband and I were in New Orleans celebrating our twentieth wedding anniversary when I had the idea for this story.

Oh, my, this is a story in itself. It all began two years ago at a writers’ conference in New Orleans. I pitched Rue Toulouse to some editors and agents. One editor actually said he was more interested in paranormal, but send him the first three chapters and he’d take a look. When I got home, I decided that even though I hadn’t pitched it, he might like The Silver Crescent so I sent it instead.

Two months later I got an email from him telling me he’d like to see the rest of the book. A few months after that I received the email every new writer prays for, the one offering you a contract. Needless to say, I was euphoric. I called and emailed every family member and friend I had telling them my news. We began editing the book and a quarter way through I was informed that due to financial difficulties they were no longer going to be able to publish my book.

I have to give a little advice here. There’re numerous small publishers popping up all over, so make sure any you choose to submit to look like they will stay in business for a few years at least. As you can imagine I was devastated. So I had a good cry and submitted the MS once again. I got a contract offer with another small publisher whom I thought would stay around. Wrong!

This time the book was ready to go to print when I was informed they were closing their doors. Once again, I had a good cry, drank a few glasses of wine, and submitted it once again. Now, they say the third time is the charm and it’s true! I’m now with a wonderful publisher, The Writer’s Coffee Shop. THE SILVER CRESCENT will be available in digital downloads from The Writer’s Coffee Shop website, on Kindle and Nook, and print on demand.

Since up to this point I haven’t written any historical, my answer may sound strange, but it would be Regency England. I love reading Johanna Lindsey, Stephanie Laurens, and Amanda Quick among others. I have an outline for a historical romance set in this time period which I hope to begin working on soon.

The first thing I’d suggest is to take some online writing classes. There are many to choose from and they can be extremely beneficial. I’ve taken many myself and can see the difference in my writing from before the classes and afterward. Entering writing contests can also be helpful, but you have to remember these are subjective, and don’t get your feelings hurt or stop writing if you get a low score. I’ve won some contests and have had other entries ripped apart, but I never stopped trying. Joining a local writers’ group is a great way to meet fellow authors. They can be helpful with critiques and basic encouragement. I personally belong to four such groups including Hearts Through History. 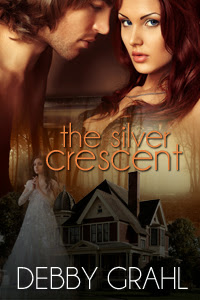 Betrayal, murder, and a fortune stolen a century ago from a Colorado silver mine send Elise Baxter to Cedar Bend on a quest to solve a family mystery—and to recover a treasure. Following clues from her great-great-grandmother’s diaries, Elise seeks out Max Holt and his restored Victorian inn.

An intense attraction between Max and Elise leads him to believe she may be the girl of his dreams. But when he discovers her true interest in him and his inn, memories of a past betrayal threaten to end their passionate relationship.

Max soon learns his inn has guests from the netherworld—a pair of ghosts who seek justice for a past murder, and an evil presence who will oppose them.

Guided by the ghosts, Max and Elise search the inn, but there are others driven by greed who will stop at nothing to unlock the mystery of the Silver Crescent.

THE SILVER CRESCENT excerpt from the Prologue:

To Cyrus’s disbelief, the old man lurched from his seat. Reaching across the desk, he grabbed Cyrus’s coat by the lapels, bringing their faces inches apart, and said, through gritted teeth, “I’ve waited twenty years for this moment and here you sit in your fancy house, with your fancy new name, behind your fancy desk, wearin’ your fancy clothes, and you ain’t got a clue who I am, you lyin’, cheatin’, murderin’, thievin’ bastard.”
Icy fingers of fear began to run up and down Cyrus’s spine; his gut clenched with every word the old man spoke. He fought to maintain a haughty expression as he stared into those hate-filled eyes.
“Release me, sir, and control yourself,” he said before Garrison spoke.
“Yes, my good man, this kind of behavior will gain you nothing. We’re all civilized men here. I’m sure, after hearing what you have to say, our good friend Cyrus will be more than happy to atone for his past sins and give you your due.”
“He damn well better.” The old man sneered as he retook his seat.
In a gruff voice, throat gone dry, Cyrus demanded, “For the last time, what is this about?”
Garrison paused to light his thin cigar. “Well, Cyrus, it’s about a Colorado silver mine and murder.”

Debby Grahl lives on Hilton Head Island, South Carolina, with her husband, David, and their cat, Tigger. Besides writing, she enjoys biking, walking on the beach and a glass of wine at sunset. Her favorite places to visit are New Orleans, New York City, Captiva Island in Florida, the Cotswolds of England, and her home state of Michigan. She is a history buff who also enjoys reading murder mysteries, time travel, and, of course, romance. Visually impaired since childhood by Retinitis Pigmentosa (RP), she uses screen-reading software to research and write her books. Debby belongs to RWA, Florida Romance Writers, Hearts Throu
gh History, and Lowcountry Romance Writers.