Hi Leslie Ann. Welcome to Adventures in Authorland. Please get comfortable and tell us about your adventure.
Thank you, Jean, for having me as your guest today. I'm thrilled that my audience is from The Land of The Long White Cloud.

In which genre do you prefer to write and why?
I write romance. From action adventure romance like STONE OF HEAVEN, to a bit sexier like Dare To Believe and then my holiday series Star Light ~ Star Bright. There is romance in varying degrees in all of them.
For a long time, I didn't tell people that my books were romance, as the first response was always, "Oh, I never read those formulaic books." (This was in the 90's and you know somebody read them as romance sales were over 55% of the market.) But now I'm proud of being a romance inspired writer, because my stories take you on a journey.
Sure at the end of every book there is a HEA, that's expected, but what intrigues me about romance is how people overcome fears to fall in love.  It's that internal conflict that drives the characters to behave after the external conflict has driven their feet…so to speak.
So I'm no longer timid or ashamed to say I write romance.

Do you see writing as a career?
Yes. Now for the long answer.  My bio says how I started, but I began seriously to write in the 90's. Always assuming I'd be the next big best seller.  Didn't happen. Then I got involved in screenwriting and got my first contract and thought I'd be the next Steven Spielberg.  Nope. But I kept plugging away, winning contests, learning more and more. Then my husband started showing me WSJ (Wall Street Journal) articles about authors going the Indie route.  That path finally sounded legitimate to me.  Then I was lucky and retired way early and treated my writing as a job.
Bad idea. I was miserable. And I've got to tell you that retirement isn't for sissies. It took me a year + before I was comfortable in my new skin.
Now I treat writing like a career, a long haul, a marathon, not a sprint. Putting the best book out there that I can write at that moment.  Not always fast, so I'm lucky to put out two books a year, but I'm comfortable with that and I know they're my best effort.  Readers deserve that.

Have you ever travelled to a place and come away with a story unexpectedly?
Oh yes, many, many times. After all, writers observe.  One of my latest inspirations was at the Black Canyon of the Gunnison in Colorado, my home state. Terrifyingly beautiful, sometimes its width appearing to be nothing more than a deep slit, with rock walls and a roaring river below. The viewing areas feel almost suspended over the canyon!  I have noodled around with a mystery set there, and since it keeps pulling at me, I guess I'll just have to write it.  Here's a link to the park: http://www.nps.gov/blca/index.htm and http://travel.nationalgeographic.com/travel/national-parks/black-canyon-gunnison-national-park/

If you could have any super hero power, what would it be?
I'd like to fly. You know that song "Superman" (It's Not Easy) by Five for Fighting?  It's the theme song from the TV show Smallville (do you get that show there?) Well it's an interesting, humbling song about Superman.  Brings him down to almost human scale.
And frankly, I know I could never be a pilot with all the training needed, so flying like Superman would be awesome way to get around. I'm not sure I'd be a good super hero, though I do like protecting the underdog.

Have you ever cried during a movie? If yes, which one and why?
Yes, often.  I was re-watching Beauty and the Beast, yes, the Disney version and I cried for the pain the beast was enduring, the meanness of people. I cry at commercials, especially those darn Hallmark commercials.  I figure it's because I'm recalling an emotion I've felt, or a person I miss. I do try and hide it from my husband, but he cries, too.

Can you give us some details about your upcoming release/s?
Ohhh, yes. Thanks for asking.  Book 2 in the Star Light ~ Star Bright series is coming out in November.  Forever Yours This New Year's Night is Jen's story, Annie's best friend from Be Mine This Christmas Night. It's also set in Boulder, Colorado.
Viking Gold will be released in Spring of 2015.  Book 2 of the Carswell Adventure Series, set in Norway.        This story features Abby, Tori's twin. Tori was featured in Stone of Heaven. 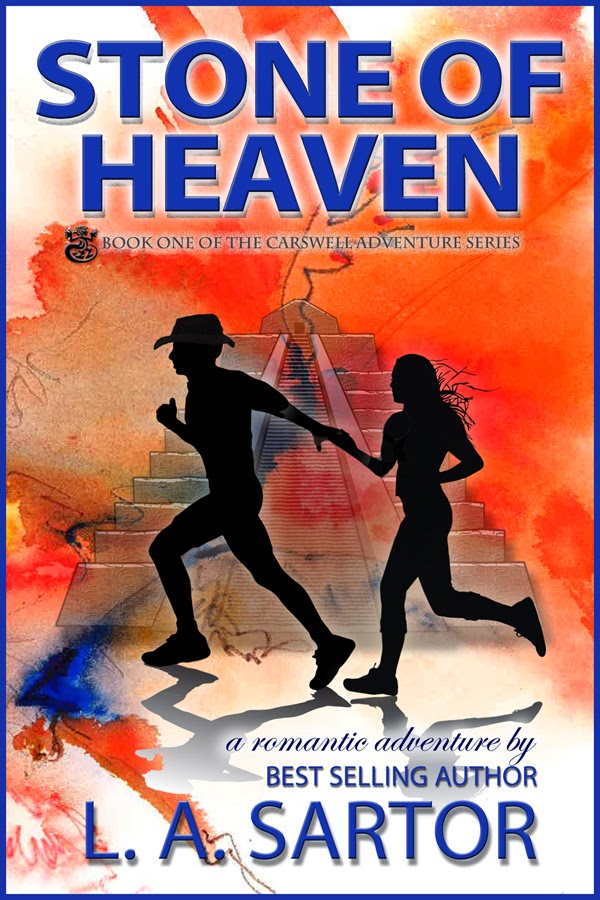 The Recluse …
Tori Carswell treasures her solitude and simple life.  Her identical twin, Abby Carswell, is the polar opposite, seeking increasingly risky adventures.  Now Abby has put herself in mortal danger, captive of an          ancient Mayan cult.  Her only hope?  Woefully under-prepared Tori.

And the Treasure Hunter …
Reid Hunter, good-natured and currently broke, aims to beat his ex-partner Abby to the fabled blue jade known as the Stone of Heaven.  But when reclusive, aero-phobic Tori overcomes her fear of flying and tracks her sister to a well guarded tomb deep in the Yucatan rainforest, he realizes Abby is in serious trouble.

Can Opposites Accomplish the Impossible?
Abby no longer trusts Reid. Can Tori risk doing so now, and join forces with him to save her sister?  Or will Reid put riches before life and love?

(New Blurb)
For the Adventurer and Romantic in all of us
STONE OF HEAVEN, Book One in the Carswell Adventure Series
Hurricane Michaela lashes the Yucatan Coast and uncovers what had best been left buried, the fabled Stone of Heaven.
Two twins couldn't be more different …
Tori Carswell is happy with her simple if reclusive life. But she worries about her younger twin, Abby, an adventure junkie seeking increasingly dangerous quests.
When Abby vanishes in the Yucatan rainforest, feared captive of an ancient Mayan cult, Tori is the only person who can rescue her.
Until, unbelievably, Tori runs into her sister's ex-partner, Reid Hunter.  A ridiculously  handsome Southern gentleman without a conscience,  interested in only one thing.
Wealth.
He'll help Tori find her sister, in return for all the treasure, the fabled blue jade called the Stone of Heaven.
The two rescuers couldn't be more different…
Tori can't trust him, even as she's drawn to the excitement and the raw masculinity that Reid wears like a second skin.
Will he help save her sister or will he put riches before life and love?

About Leslie Ann:
Leslie Ann Sartor (aka L.A. Sartor) began telling stories around the age of 4 when her mother, at Leslie’s insistence, wrote them down and Leslie illustrated them.  As an adult she writes suspense and action adventure novels with a dash of romance, and screenplays—she's had a contracted adaptation!  She lives in Colorado with her husband whom she met on a blind date.  Leslie loves to travel and thinks life is an adventure and we should embrace the journey.  She has a blog: www.anindieadventure.blogspot.com. She is also one of the Five Scribes at www.fivescribes.blogspot.com.

If you'd like to be on my mailing list for release dates please use this link; http://lesliesartor.com/?page_id=214
I really don't send out many newsletters, maybe 4 a year.  So you won't be inundated, but there are usually great deals included in the letter.
Here is a fun challenge.  Comment on which blurb you like the most, old or new, and you'll be entered into a drawing for a digital copy of STONE OF HEAVEN.
I may have a slightly new cover as well. But I don't think they're ready to reveal yet.
Social Links
L.A. Sartor's Website
Facebook profile:
Facebook Author Page
Twitter
Goodreads
Pinterest

Buy Links for all books:
Amazon

Thanks again for having me, Jean. It's been a lot of fun.