Hello Samanthya and welcome to Adventures in Authorland. Please get comfortable and tell us about your adventure,

Jean, Thank you for having me as a guest on your blog.

You’ve recently signed with a publisher. Tell us about your writing journey before and after this point.
As a child I had many desires, be a singer, be an actress, but the one thing that seemed to come natural was write. I wrote poems, short stories, and then tucked them away. When I graduated, I married a military man, we travelled the United Stated and abroad. Once I found historical romance novels, I couldn’t put a book down. I fell in love with the characters and needed to know their happy ending.
When my children were grown, I started writing again. I wrote a story and once again life took over, so I put my MS on a shelf. A few years ago I decided I wanted to pursue writing seriously. I entered a lot of contests, workshops, and made some good friends via e-mails. I pulled my story back out and finished my historical, THE RIGHT ONE, the first of a trilogy in the One and Only Series.
I sent my MS to editors, and finally a pitch opportunity with Savvy Authors resulted in an editor asking for a full. Now I have not one, but two books published by Soul Mate Publishing. I’m working on the historical sequels, book 2 to be released soon, and also have plans for a contemporary series, The Firemen of Station #8.

In which genre do you prefer to write and why?
My main love is historical. I would have liked to live in the Regency time period. Dashing lords and pirates seem so romantic. So historical genre is the one I chose. One day I was playing around to get my mind off edits and I wrote a scene with two women bantering back and forth. The words seemed to flow. I ended up writing my first contemporary Something More. Even though historical romance is my first love, the Regency requires a lot of research and effort with language of the time period. But I learn a lot of history while I’m looking. So many amazing details which makes a good foundation for any MS. I find the more I research, the more I write down, the deeper my thoughts and the more my characters come alive.

What books have most influenced your life most?
Historical Romance—And who has not been inspired by Kathleen Woodiwiss!! There are so many favourite authors, Shirlee Busbee, Janelle Taylor, Johanna Lindsey, Catherine Coulter, Jude Deveraux, I’m really afraid to mention names for fear of leaving someone out. I’ve found many new authors as well and I look for new authors to read.

Can you give us some details about your upcoming release/s?
In my first historical, Katherine’s brother is missing. Find out what happened to Kat’s brother in the thrilling sequel in the One and Only series. Book 2,  Stephen’s story -  “The True One”
His ship in splinters and his men captured, Stephen is a broken man. Yet the torture he received by his enemies is nothing compared to the torment he bears from an angel with lavender eyes.
Jennifer left England full of a young girl’s fantasies of romance and adventure. When she cares for a near death captain, memories emerge of the family she left behind. Will the passion they share be enough? He must choose – her or revenge.
After that, Book 3, Giles’ story -  “The Only One”

Do you have any advice for new writers beginning their adventure?
No# 1.  Join RWA. From there you learn to do a number of things. You can join chapter groups, critique groups, you’ll find friends and receive a lot of help. Take every workshop offered—GMC, POV, character interviews, etc. Believe me, you’ll be glad you did. Enter contests and keep your mind open. Take criticism as constructive. Make your writing better. Don’t expect success overnight. It is a long, hard process. If you are determined, keep trying. Don’t give up.

Share three fun facts about you that most people don’t know.
Blue is my favourite colour. Never a pink girl. Wonder if that had anything to do with the fire trucks and guns I played with as a child. Hmmm. I’m working on Firemen of Station #8 Series. I wonder if I had a deep desire even then.
I would love to ski, jump from an airplane, all the things I should have done at a much younger age. Now, I love to go to the beach, read a book, take walks, crochet, and watch my grandkids.
I love to make people laugh. My hubby is so silly. And his playfulness has rubbed off on me. Anything can come out of my mouth sometimes, just for fun. I’ll say things that don’t make sense, have people raising their eyebrows, or just busting out with laughter. At my age I still love rollercoasters.
Dark lords are sexy. Every girl dreams of a strong hero and every man wants a sexy woman. The idea of mistaken identity intrigued me and I needed a hook. As I put my story to paper I created conflicts. This is the result. 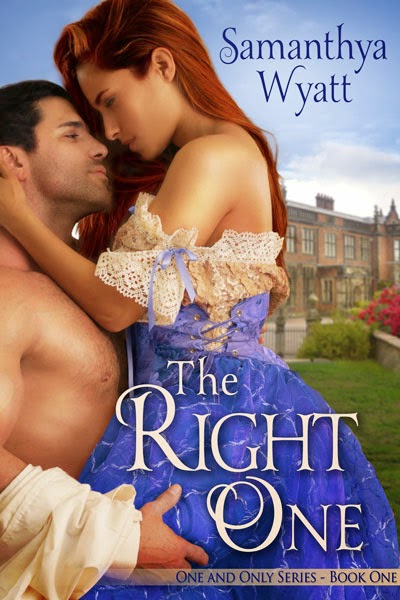 Blurb: THE RIGHT ONE
Morgan Bartholomew Langston, Earl of Whetherford, has finally decided to accept his fate. Tired of dangerous assignments and putting his neck on the line, he has returned to his ancestral home to accept the title of his birthright and produce the required heir. But, when he arrives, he finds his home has been invaded and a female has taken off with his mother’s jewels. Morgan decides the traitorous jade will not get away, so he sets into motion a plan to bring her back. When he abducts the wrong woman, his reaction to her brings him dangerously close to breaking his vow of forbidden emotions.
Katherine Elizabeth Radbourn is a strong, independent woman, and at the age of twenty-three is still unwed. In a desperate attempt to find her brother, she is abducted which leads her on a journey to love and mistaken identity. Once she meets her captor, fear and indignation dissipates to an overwhelming awareness. Even though he tells her she is the wrong one, Kat realizes she has finally met a man that—not only she is attracted to—but has awakened her woman’s body. Does he really care for her or does he secretly yearn for the woman she is supposed to be?  Uncertainty makes her risk the very man she has given her soul.

EXCERPT:  THE RIGHT ONE
He abducts the wrong woman . . . she proves she is the right one.

Nothing else in the room existed but the two of them. His hypnotic pull seared her, sending a tingling sensation beginning in her stomach, then flowing down the back of her knees and extending through her limbs making it impossible to move.
Her throat tightened.
If those eyes could shoot fire, they would sear holes right through her. But the expression on his face . . . he looked like he’d just had a good kick in the teeth.
Morgan felt as though someone had just punched him in the gut—hard. His breath caught at the sight of the stunning creature before him. Lost in amazing green eyes—adrift in their sparkling jade and mystique sensuality. He scanned her high cheekbones with soft creamy skin, and let his gaze slide down to fasten on luscious lips. Suddenly his mouth was dry
She stood straight and tall with her chin at an angle in challenge. Even with that rod in her backbone, he sensed her vulnerability. A pang of concern struck his chest.
“You,” he whispered. What the hell is she doing here?
An explosion went off in his brain. Holy Mother of God! Those fools. They must have brought her here thinking she was Juliana.
Blood and the devil!
Morgan’s heart kicked and landed somewhere in the bottom of his gut. Choking on the words for this unsettling circumstance, he compelled himself to speak hoping his voice would not betray him. “I owe you my profound apology. There has been a horrendous mistake, madam. And I fear that I have made it.”
Those beautiful eyes blinked. She stared at him as though someone had taken over her senses. Was this woman a simpleton?
He hurried to the sideboard. Even though she could quite possibly be in shock, he ignored the stronger spirits and poured a generous amount of sherry. He didn’t want to knock her on her bum, just bring some colour back in her face. He strode back to the unknown beauty and placed the flute in her hand.
Changes came over her face. Stupor—awe—surprise—and . . . anger. Although Morgan was not a patient man, he waited.
Her eyes flamed with fire. “Did I hear you correctly? Mistake?”
Morgan stopped the oath before it left his mouth. “Yes. I believe your being here is a mistake.”
“A mistake.” She echoed with a stupefied look, unseeing the crystal she held in her hand. “That’s what I thought you said.”
She raised the glass and downed the liquid in one swift movement. Tears came to her eyes as she tried not to cough. She marched to the side table and he feared she planned to get more. Instead she set the glass on the table top. When she faced him, her hands were fisted and the fire in her eyes burned brighter than the flames in the hearth.
“Mistake?” she snapped. “I was kidnapped! I have been a prisoner in your home. Forced to come here and forced to remain. I’ve been scared out of my mind. Every day I worried if you still lived. I agonized over what would become of me if you died. Then I walk in here and you have the audacious daring to tell me it was a mistake?”

Visit my webpage: samanthyawyatt.com
You can also find me on Facebook, Goodreads, Amazon, and SMP Authors.
Thank you for your interest. Tell your friends.