Firemen and cowboys get Calisa steamed up


Hi Calisa, welcome to Adventures in Authorland. Please make yourself comfortable and tell us about your adventure.

When did you first consider yourself a writer?
When I got my first rejection. LOL In 2005 I decided to take my ‘hobby’ to the next level and wrote a “real” book targeted for Harlequin Desire line. A year later it was complete and polished, so I submitted and got a full request just a month later from the Desire senior editor and she suggested I also send a partial to the editor of Harlequin Special Edition (back then it was still known as Silhouette Special Edition). It took all of three weeks for the SE editor to reject the story. To compound that, the Desire editor lost my ms and told me to check for it with the same SE editor who had rejected it. Nice editor that I got, he asked me to email the partial to him (again-- because he’d never received the full from Desire editor. He then rejected it a second time, two years after the first rejection. With a story like that, I figured I had to be a writer! LOL

What inspired you to write your first book?
I’ve been writing as a hobby since I was fifteen years old so it just seemed the natural progression for me to get serious about my first love (besides my hubby and three daughters, that is) and begin writing to submit. It took me until I was forty to reach that point after raising our daughters. We’re all told to write what we know and I’m a horse person married to a construction hottie. The story I chose to write is about the owner of a horse rescue ranch and a construction owner who builds a much-needed barn for her. I titled it Contract For Love and it’s a reunion story of a couple clearly meant to be together but life decides otherwise as they are torn apart time and again. Of course they get their HEA in the end. J

In which genre do you prefer to write and why?
I write contemporary romance--you know, cowboys, firemen, first responders--but find myself dabbling with contemporary paranormal, too, these days.

You've recently signed with a publisher. Tell us about your writing journey before and after this point.
I wouldn't be able to answer this from a new author perspective since it’s actually been four years since my first sale, but this January I got the opportunity to sign with Kensington Publishing Corp for their new imprint line when the e-press I had sold to last year sold to KPC. On the other hand, I’ve also had two books sold before that point. So now I’m also with a BIG house and it’s a new feeling and adventure for me. Exciting? Some, yes. But my very first sale was to Wild Rose Press with a novella and nothing will ever beat that first sale euphoria. Home, that novella, has expired its contract and is no longer for sale at this time. I’m thinking of touching it up and re-releasing it with another e-press, however.

When you are not writing, what are your hobbies, passions, etc?
I love horses, as I said, so I spend time with my quarter horse, Sonny, and helping my grandchildren learn to ride their pony, Apple. I also read when I get a chance and my other creative outlet is designing and making jewelry. I love playing with polymer clay and beads! I’ve embraced this hobby a lot while on hiatus because it gives me a fun creative outlet while not writing.

Do you have any advice for new writers beginning their adventure?
Write, read, write, read. Be persistent and remember editors are your friend. J Oh, and beware of burnout! I’m on a hiatus this summer because life caught up to me and I couldn’t write a word of sense. I decided it was time for some much needed me time. Give yourself permission not to write. It really IS okay! Don’t write until you can’t think straight or writing is no fun, or feels like hard work. It is work if it’s your career choice, but remember to take time for you, family and other interests to refill your writing well once in a while.

Love, like life, is not without risk.
BLURB:  RISK FACTORS
Veterinarian Vivian Dane has purchased her uncle’s practice in the tiny town of Wales, Missouri, where most residents still doubt her ability to treat their pets. But Viv is used to being considered less-worthy than her predecessors. After all, her parents are world-renowned wildlife vets, and most everyone is unimpressed she’s chosen to not follow directly in their footsteps. Now Connor, a patient’s owner, is hot for Viv, but clearly doesn’t think she’s dating material because he has a daughter…who he believes no woman is good enough for.
Being a perfect dad is EMT paramedic Connor’s life focus. He can’t seem to stay away from sexy Doctor Viv, but attraction is as far as he’ll ever let it go. His mother abandoned him, leaving him to be raised in the foster system, and then his wife abandoned both him and their daughter. He absolutely will not risk bringing another woman into his little girl’s life and having her feel the hurt of being left…again. 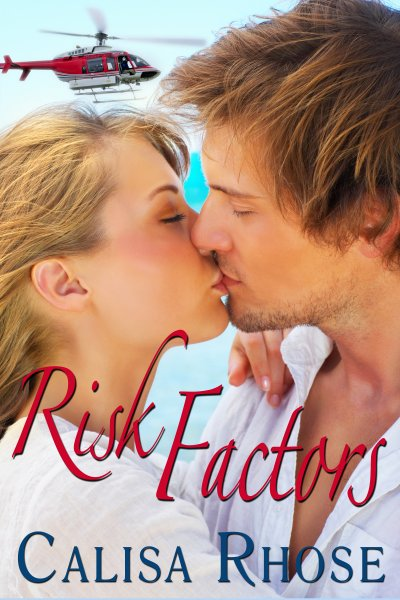 Forfeiting is easier than attempting and failing. So why does Viv feel compelled to prove she’s a sure bet for Connor and his daughter? Can Connor trust Viv--and himself--enough to play the possibilities?

EXCERPT:
It was close to five o’clock and Viv wanted to go home. Winter hadn’t reached the Midwest yet, but from September through October the temperatures often dipped and dove sporadically, before diving for the long winter ahead. There’d been a slight chill in the air that morning and she hoped for a few more weeks of warmth before harsh weather moved in.
She looked forward to a hot soak in the bathtub, but Skittles was due for pick-up first. Connor had assured her he’d pick her up, or have his father get her before five. She glanced at her watch again. Four-fifty-six. She didn’t mind staying late if she needed to; it would be a shame to leave the nervous animal alone another night.
She opened the small closet to put the dust mop away.
“Hello.”
With a start, she spun and her hand caught the broom handle on her way around. Gasping, she grabbed uselessly, horrified as the cleaning tool flew sideways from the closet. In slow motion she saw it shoot out against Connor’s shoulder and fall with a sharp snap onto the tile floor.
“Oh! I’m so--so sorry! Are you hurt?” Instant heat rushed up her neck and she bent to reclaim the errant broom to shove into the closet. She slammed the door and leaned against it on a sharp breath.
“I’m fine. You worried your killer broom might attack again? You might consider putting a lock on the door,” he said with a crooked smile.
Puzzled, Viv looked around and realized with total humiliation how it appeared she’d trapped the broom inside the closet--when in actuality, she wanted to climb through the door beside the instrument and hide.
“Of course not. That would be silly. I didn’t expect you right now.”
“It’s two minutes of five. I told you I’d be here for Skittles. Is it too late?”
Right. The skunk. “No. I’m sure she’s more than ready to go home. Do you have the pet carrier to put her in?” She probably didn’t need to ask when Connor stood empty-handed before her.
He lowered his head and she knew he’d forgotten it, fought back a smile at his forgetfulness.  “Sorry. I drove straight from work and didn’t think about it.”
“No worry. I have one you can borrow.” Which meant he’d have to see her again. She’d definitely need to see him again.
“Thank you. I’ll bring it back tomorrow.”
“Oh, there’s no rush. I keep a few on hand for emergencies.” She led him back to the cage where the skunk still huddled, and got a carrier while he opened the cage to retrieve his daughter’s pet. As he lifted the black fur ball out, Viv set a pink case next to him.
He hissed under his breath and almost let the animal loose. Viv opened the cage and held it upright for him to lower the skunk down inside and shut the door. Once he stood with the pet taxi, she detected a smear of red on one finger.
“She bit you?” Skunk bite, rabies, germs…
“It’s fine. When she’s scared she tends to nip a warning like a cat.” Connor’s lack of care concerned Viv, however.
“I should clean it with antiseptic before you go.”
“I’ll tend it when I get home.”
“But, it may have germs…get infected.”
“It’s not the first time, and her rabies vaccination is current. Thank you, but it’s not necessary.”
Viv stopped by a cabinet on the way to the front reception area to grab ointment and a Band-Aid.

About Calisa
Calisa Rhose is an Okie, born and bred, through and through, and proud of it. While growing up, when she wasn’t on the back of a horse, she could be found with pen and paper in hand. Her writing career began with poetry in her younger days. Then she discovered Rock-n-Roll and cute musicians. Poetry turned into stories of romance and dreams. These days she lives with the same man who convinced her to take a romantic journey with him almost 30 years ago. After raising three strong daughters she spends her days loving their granddaughters, hoping for a boy someday, and writing. When she’s not writing, you can find Calisa putting on her editor hat and working to help other published and aspiring writers.
She is working on more projects with her favored contemporary cowboys, first responders  and firemen, as well as the occasional ‘other’ heroes- and their sexy female counterparts, those sassy, stubborn heroines.

Thanks for inviting me over Jean! I’d love to offer an e-copy of Risk Factors to one lucky person this weekend.