Hello Viola, and welcome. Please tell us about your adventure.

I stayed home to raise my two daughters (now age 16 and 12). My husband and I had a deal. When they both were in school full-time, I’d get a year off. Then after that, I’d either go back to school or get a job. In that year, I realized I was a writer. I started taking an online class in Humanities, something I adore, and I kept getting upset at the class for taking time away from writing. A year later I offered to get a job at a local craft store. My husband said, “You already have a job. You’re a writer.”


I started writing Buffy/Angel fanfiction. A scene came to me, a vampire trying to turn a girl because he wanted to give her the greatest gift he knew and she didn’t understand and rejected him. I wrote the scene out and put it away. Four years later, I got stalled on another project (A YA fantasy) and pulled out the vampire scene. Something about it sung to me. That became my 2007 National Novel Writing Month project. 56,000 words later, I had the beginning of what several evolutions later would become THE MARK OF ABEL. In which genre do you prefer to write and why? I love paranormal. Friends have challenged me to write a contemporary romance. I can’t do it. Somewhere a faerie, elf or vampire will show up. I love playing with the paranormal universe. I am a puzzle solver and writing is the best puzzle, because you get to not only solve it, but you create all the pieces.

I love author Kelley Armstrong. I used to hang around her board. She mentioned she was going to Romance Writers of America’s National Conference in DC that year. That’s where I grew up and at the time I was living in Delaware. I figured if she considered herself a romance writer, then I was probably one. I didn’t want to be all alone at the conference, so I joined the Fantasy, Futuristic and Paranormal chapter as well as the Maryland chapter. I met some amazing authors who really helped nurture my career. Four years ago, I heard about the Muse Online Writers Conference, a free online writers conference that happens every October (http://themuseonlinewritersconference.com/). Through that I learned how to moderate online pitch chats from the wonderful Lea Schizas. I must have heard over 100 pitches through various organizations. 1 1/2 years ago, Lea and I chatted at the conference. She’d heard me pitch to agents at her conference and wanted me to submit to MuseItUp, her company. I jumped at the opportunity. Right before my release day, I came down with shingles, so I’ve had to reschedule my blog appearances.

Thanks for having me.

Who are some of your favourite authors?


Through RWA I have an amazing autograph collection. I got to meet Kelley Armstrong, and by the end of the conference, she knew my name. I was soaring. Through RWA I’ve also met, Jeri Smith-Ready, Rachel Vincent, Nalini Singh, Kresley Cole, JR Ward, and tons of others. I’ve gone to signings for Rachel Caine (I travelled two hours for that one and brought my kids), Richelle Meade and the incredible Neil Gaiman. I’d love to meet Charlaine Harris, Rebecca Zanetti, Patty Briggs, Laurell K. Hamilton and Adrian Phoenix. Then my collection would be complete, for now. I’m always on the lookout for new authors.


I’m a big cry baby at movies. I cried during the opening of Up. I bawled my eyes out at the end of the most recent Batman. I was a blubbering mess for St. Elmo’s Fire.

Thank you so much for having me. I had a great time. I hope your readers enjoy THE MARK OF ABEL. It was a lot of fun to write. It reimagines Judeo-Christian stories to explore Lucifer and redemption. I love playing with the stories while still being true to the original source material. I’ve used not only the Bible (from Genesis to Revelations, including the Gospels), but extra-canonical work like The Book of Enoch and Alphabet of Ben Sira. 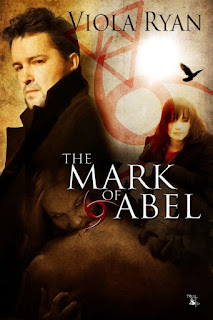 A great deal of research went into getting the heroine’s past lives accurate. If I ever make it big, I didn’t want there to be documentaries about how I messed things up, like happened with the DaVinci Code.

BLURB: Lucifer is fed up with humanity. He created hell to deter evil, but man’s inhumanity is only escalating. He just wants to return home to heaven, but ever since that little problem in the Garden of Eden, the Pearly Gates remain firmly shut to him. It doesn’t help that he’s the first vampire, an abomination in God’s sight. Fortunately, two thousand years ago Lucifer’s estranged brother, Jesus, gave him a prophecy. To fulfill it, all Lucifer has to do is find the right artist, study her artwork and the path back to heaven will be revealed. The artist even bears a symbol so he knows who she is. Too bad she is murdered every time he finds her.

Janie’s a frustrated artist and college art teacher who wants two things—a guy she can show her paintings to and a night without nightmares. Each nightmare plagues her until she paints it. She doesn’t realize these paintings are key to unlocking her destiny, one that could redeem the original fallen angel.

BIO: A very good friend of Viola Ryan in high school said, “You don’t think outside the box. You blow the thing up.”

Sometimes boxes need exploding. That’s why she’s here. She has a whole bag of C4 and isn’t afraid to use it. She’s blessed with people who treasure her eccentricities or at least put up with them. Sometimes the box can be a cozy place. Without some sort of stability, her two daughters’ and her life would be unmanageable. That stability comes from her husband. He’s the rock holding her family together.

On the flip side, his career is anything but stable. He’s a Chief Marine Safety Technician in the US Coast Guard. They’ve lived from Kittery, Maine to Yorktown, Virginia. Fortunately, the moves have all been on the east coast. Then again, the Coast Guard tends to guard the coast. Her oldest daughter (16) was born on Cape Cod, not far from Plymouth. Massachusetts. Her youngest (12) was born in Yorktown, Virginia, down the road from Williamsburg. Viola jokes they’re doing the colonial America tour.

EXCERPT: Keeping Eve in Eden was definitely an act of justice.

In one smooth motion, he kicked up the sword, grabbed it, raised it above his head, and plunged it through God’s back into his heart. He twisted the sword, and God slid down into a crumpled heap at Lucifer’s feet.

“Now it is.” Lucifer held the sword above his head. It didn’t ignite. Who cared? Justice had been served. Little did God know the sword he’d created would be his death.

Eve appeared next to Lucifer. He couldn’t contain his joy. Now they would fashion the universe how they wanted.

She touched the sword with one delicate finger. Blue flame consumed the hilt, and he dropped it. Before it hit the ground, it disappeared.

“You are not ready for this.” Eve/God’s thoughts held a tinge of disappointment.

Lucifer appeared outside of heaven. A high wall of the same gleaming material as the palace formed around heaven. Eve appeared behind an open gate. Its gleaming bars stretched up and down into infinity until up became down and down became up. It swung shut.

He raced for it, but was too late. The clang echoed in his soul, and he collapsed to his knees.

“You are no longer an angel. You don’t belong in heaven. You must find your way home.” God turned away.

“What am I?” Lucifer rose and sent a burst of energy at the gate. It remained shut.

“Am I human?” His soul bled at the question and darkness surrounded him. As a human he had nothing to offer Eve. He couldn’t protect her. He couldn’t create another Eden for her. She would beget Adam’s children in pain. Lucifer cringed.

Eve/God appeared next to him and traced three triangles above his heart, each attached to the other two at the corners of its base to form a fourth triangle in the center. They burned, and he screamed until his voice was raw. He collapsed and gulped fire.

Standing above him, God laid her hand on his shoulders. Pain shot down his back. He reached around, and his hands passed through wings of fire. God ran her hand along his arms. His skin itched, and then burned, as it morphed into swirling red, orange and yellow. With sweat pouring down his face, he allowed God to help him up.

“Your re-creation occurred in fire. This is now your true form. To maintain your angelic powers, you must feed on the intense energy of fire.” A ball of fire appeared on God’s outstretched hand. She shoved this into his heart.


A sharp pain stole his breath, but Lucifer refused to collapse again. He grit his teeth, and his entire body shook.

“To maintain free will, you must drink the blood of humanity every three generations.”

“What am I?” he shouted toward the center of heaven.

Trailer: I made myself and my husband arranged the music.
http://www.youtube.com/watch?v=UayqdSPMFMQ&feature=youtu.be
Posted by Jean Drew at 11:48 AM