Welcome, Jaye. Please get comfortable and tell us about your adventure.

Thanks so much for hosting me here at Adventures in Authorland. I’ve travelled quite a bit through the years, all over the United States, Europe, Scandinavia, and the Middle East, but your blog is the closest I’ve been to ‘down under’.  I’m very excited to be here!

When did you first consider yourself a writer?
Much later than you would think. I began dabbling at writing when my kids were still preschoolers. Let’s just say that was a while back. One day, I took stock of how many stories I’d started. There were nine partial manuscripts on my hard drive, but none were finished. I was appalled and felt utter shame. How could I call myself a writer if I couldn’t get one complete manuscript under my belt? With that reality check, the self-dare was ON. The day I typed ‘The End’ to my first completed novel is the day I honestly felt like a real writer.

Do you see writing as a career?
Absolutely. It’s a different world now than when I first picked up the pen. (Yes, an ink pen and a spiral notebook.  I took out the typewriter when I couldn’t read my own handwriting. My first computer is a whole ‘nuther story. <wink>) With so many publishing avenues now available to authors who take their writing seriously, who truly work at their craft and want to put out the best books they possibly can, then we’re limited only by our own energy, drive, and ambition. Yes, I’m in it for the long haul.

As a child, what did you want to do when you grew up? Writing, or something else?
Oh, something else entirely. Back then, my world was filled with adventure and drama. All of it was in my own mind, of course. I’ve always been drawn to the outdoors. I grew up on my dad’s ranch in south-central South Dakota. That’s a lot of open land to explore, and Mother Nature is a wondrous thing. Before I was old enough to actually help around the ranch, I spent my time hiking up and down the three creeks running through our land. I imagined I was Sacagawea guiding Lewis and Clark on their explorations of the great American West. I’m still hanging out in that imaginary world, as a writer, but now others can take the joy ride, too.

If you could time travel back, or forward, for one day, where would it be and why?
My heart belongs in the American West. There are so many stories of survival, adventure, and the challenges of families as they worked their way across the prairie and through the mountain ranges hoping for a better life. Isn’t that was we’re all doing today? Trying to give ourselves, our families, the best we can? In a heartbeat, I’d pick the 19th century. That’s where all the American greats hung out. Annie Oakley, William ‘Buffalo Bill’ Cody, Calamity Jane, James Butler ‘Wild Bill’ Hickok, Belle Starr, and the list goes on and on. Some were famous, others were infamous, but they filled our history books with colourful incidents that kept me wanting more. But, you did say this is only for one day, right? I don’t think I’d make it much longer than a week back then. I’m addicted to my email and indoor plumbing.

If you could have any super hero power, what would it be?
My all-time wish would be to fly. Like all kids have done, I’d lie on the ground and stare at the sky picking out cloud formations during the day and counting shooting stars at night. Our ranch was in a direct path of the Canadian geese for summer and winter migration. When they flew overhead, I’d yearn to go with them. To soar among the clouds and stars like they could do and see the world from way up high.


Study everything you can. Read all the genres, not just what you write. Read the business pages. Keep up with the authors in your genre and learn from them. And, don’t be in such a hurry to publish that you jeopardize your own career. Make sure your work is the very best it can be before you submit to an agent or editor. They want your best work, and readers expect excellence. 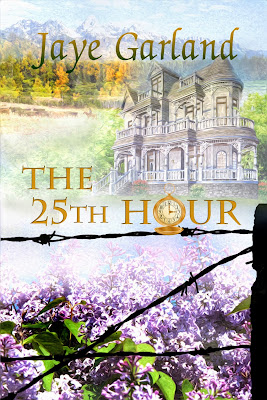 Chased through time by her father’s murderer, Houston architect Sheridan Wells unwittingly ‘erases’ herself and hurtles back to 1877 Wyoming Territory, to the moment that changed her family’s history forever—to the source of her father’s wealth—wealth the villain swears is his.

Heart locked by guilt, widower Alexander Reed, a War of the Rebellion hero-turned-rancher, attempts to disprove the transient woman’s story, labels her a charlatan and intends to dismiss her, but his precocious daughter has already claimed Sheridan as her new mother.
When the villain renews his quest for wealth and vengeance, Sheridan and Alexander must combine forces to defeat the crazed killer. This time, and no matter the cost, Alexander vows to protect his family. Will Sheridan’s stalker claim his due, or will she find sanctity within the family of her heart…before the window of time fades forever into the 25th hour.

She squinted against the light and focused on his accent. He towered over her, hovering like her very own guardian angel, and was handsome enough to put the god of gorgeous to shame. Oh . . . my . . . God. I’ve died and gone to cowboy Heaven.
“Easy there. You rest now. You’ll have plenty of time to move around once Doc Patterson sees to that bump on your head.”
She’d forgotten about the bump and touched it again. “Ouch!” The lump had grown.
“That’s a worthy token. Were you thrown from your horse? I didn’t see your mount but they don’t usually wander off too far. We’ll find your ride after we tend to you.”
She tried to think, but the effort cost her as pain converged between her temples. She slumped back into the bed full of pillows in the huge four-poster.
“You said this was your ranch? Did you buy this place from the Culver estate?”
“Culvers? No one by that name in these parts. Are you sure you know where you are? This is the Bar-R ranch. Staked my claim a few years before the war.”
His statement left her confused. According to the contract, the house had been built in the 1940’s. The Culvers purchased the property from the original builders and owned it ever since. It had lain dormant the past few years, overgrown and wasting away. If the estate has already been sold, then how much time, really, have I lost?
Her stomach tightened. Something was wrong. Very, very wrong. “How long, exactly, have you lived here?”
“Broke ground in 1855. My uncle and I were looking for a good place to raise cattle. After the war, the peace and solitude out here kept me from ever wanting to go back East.”
He said 1855? Must have meant 1955 . . . but, if that were true, he’d older. A lot older . . .
The little girl from earlier peeked shyly from behind Heavenly Cowboy’s broad back. He hefted her up on his lap. “She’ll own all of this one day.”
“Angel Rose.” Sheridan breathed the name. It came out in a hoarse whisper.
“Yes. This is my daughter. Apparently, the two of you met out in the barn.”
The lump on her head throbbed and she struggled to recall Heavenly Cowboy’s name. He’d introduced himself moments ago, but his identity slipped from her mind like mist in the night. What was it about this man that struck her as familiar?
Mentally, she retraced the steps of their meeting and an ethereal vision of blueprints blended with the cryptic scenes: Reed. Alexander-freakin’-1868-Wyoming-Reed. Holy shit.

Some authors will tell you they’ve been writing from the day they first held a crayon. Well, other than chubby little fingers, I wasn’t that child.
Instead, I explored my dad’s pastures and creek beds pretending to be Sacajawea, building forts, and waging imaginary war against pirates or invading Vikings. Of course, I was the heroine and my team always won.
Then one day, I scribbled a skeleton plot on the back of an envelope.  I’d made the leap from avid reader to heartfelt writer and resumed living vicariously through characters of my own creation.
Thanks to my very own hero hubby, we’ve traveled the world experiencing real-life adventures, all the while collecting scraps of plots and snippets of characters for my next fictional project.
Buy links
http://tinyurl.com/lo7pqhx