My blogging guest went AWOL this week. I hope she's OK. So I hope you will forgive the break in interviews and a little self-promotion. Interviews resume next week. But this author had her own adventure many years ago and couldn’t resist turning into a book.

My husband went to a great deal of trouble to wrap my Christmas present.

A massive box, but not too heavy, all wrapped up in festive paper. When I opened the box, inside was another box, also wrapped in Christmas paper. And, yes, you guessed it, inside there was another, then another, and another, right on down to an… 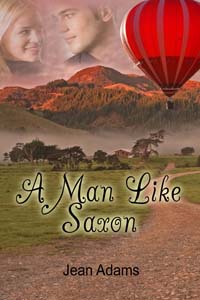 Inside there was a ticket for something I had always wanted to do—take a flight in a hot-air balloon.

I’d often seen them floating gracefully over the hills and dreamed of taking a ride in one. Now I could.

On a Sunday morning about two weeks later, I took that ride and it was truly magical. Several weeks after that A MAN LIKE SAXON became the first twinkle in my eye.

I wasn’t a scaredy-cat like my heroine, (she has good reason to be), but I have to admit to a few moments of trepidation mixed with the excitement as we approached the launch-site on the cold, but windless, dark morning.

I’ll let my characters take over the story from here.

“I’ve got a surprise for you.”  Saxon sounded excited.
Danielle frowned and propped herself up on one elbow. “A surprise?
“You’re going to love it.”
“What kind of surprise? It’s the middle of the night.”
“It’s just after five. It’ll be light in an hour.” Still beaming from ear to ear, he indicated a glass of orange juice on the nightstand. “I’m taking you up in the balloon.”
The smile froze on her lips as terror took hold. Her stomach knotted. The balloon! Dear God, no.
She tried to swallow, but nothing happened. They had shared a wonderful two weeks of fun, laughter, and lovemaking, and now she could see it all ending with them plummeting to earth in a ball of fiery nylon.
“Now?” was all she managed to squeak through her closed throat.
“Best time of day.”
Did he have to keep grinning like a dog with two tails? She pulled the bedclothes around her body in a futile attempt at protection.
“This is a joke, right? It’s pitch dark out there.”
Saxon laughed. “It’ll be light by the time we’ve had breakfast and driven to the Eastons.”
“David and Susan’s?” she croaked inanely. “What have they got to do with it?”
“They and some of the crew helped me set this up. It may be the only chance I’ll have to take you up ‘til filming’s done. By then, the weather will probably have packed in.”
Everything fell into place. The covert conversation last night that ended abruptly when she appeared. They had been setting up her “surprise”. The phone calls downstairs just now. Probably to the Met Office, then to David.
Bile rose in her throat. Saxon had misinterpreted her idle curiosity about ballooning as interest. Why hadn’t she kept her big mouth shut?
“Let me get this right,” she choked. “David and Susan, and some of the crew, got up early on a Sunday morning especially so you could take me up in the balloon?”
His grin refused to be shaken. “Yeah. Terrific of them, huh?”
“Terrific,” she repeated miserably, her heart racing. The thought of going up there made her feel sick, but they’d all gone to a lot of trouble to do this for her, given up part of their one day off in the week.
He inclined his head at the nightstand. “Drink your juice. I’ll get breakfast while you dress. Warm clothing. It can get pretty darned cold up there. We have just over a half hour.”
To live? “Until?”
“Until we have to leave.” He started for the door, then turned to face her. “Scrambled eggs okay?”
The eggs would probably end up a lot more scrambled if she tried to force them down her throat. She stared after him in wide-eyed disbelief as he went out the door.
﻿﻿﻿
﻿﻿
Was this the divine retribution she’d been waiting for after all?


If you want to find out what happens next, A MAN LIKE SAXON is free on Kindle this weekend (Nov 10/11).

What follows is an almost verbatim account of what happened on my balloon flight, from arrival at the launch site, to the champagne breakfast afterwards, (good thing I kept all the notes). The only difference is that we were eight passengers and the pilot, rather than just one.